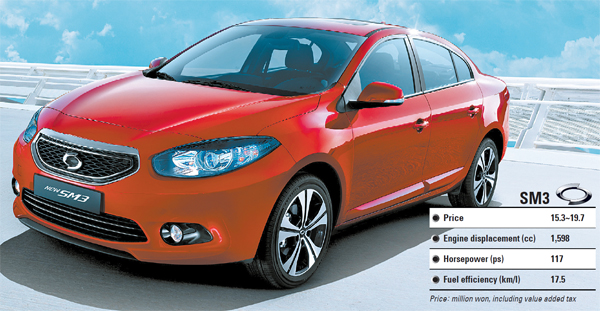 Local carmakers are set to have a war in the compact car segment as new models enter the market with upgraded features.

Renault Samsung Motors will start selling its new SM3 on Saturday, while Kia Motors’ K3 is expected to hit the market next month. These cars will challenge the nation’s best-selling car, Hyundai Motor’s Avante (Elantra in the United States) this fall.

In particular, Renault Samsung is hoping to turn around sluggish sales in the domestic market with the SM3. The Korean unit of the French automaker sold only 35,654 vehicles in the first seven months of this year, which is a 43 decrease from a year earlier.

The SM3 has been a hit model for the automaker. Since the first generation of the compact-sized vehicle was introduced in 2002 and the second generation released in 2009, more than 320,000 units were sold in Korea. Overseas it is sold by Renault under name “Fluence.” Last year, it sold 140,000 units in 83 countries.

The nation’s fourth largest carmaker said with the new SM3, it is planning to sell 35,000 units annually in Korea and want to achieve a market share of 17 to 18 percent in the compact market.

“The new SM3 is built on the base of the Renault-Nissan technology and has enhanced gas mileage with other improved features,” said Renault Samsung CEO Francois Provost at a media test drive event in Ansan, Gyeonggi on Monday. “It will help Renault Samsung make a new leap forward.”

The new SM3 is a partially modified version of the second generation SM3, the first makeover of the model in three years. 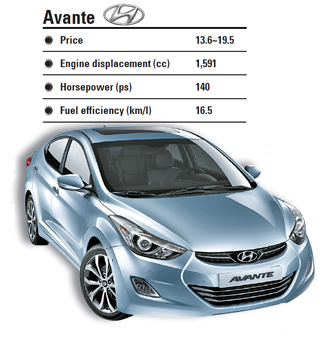 The price of the vehicle has been raised 2.4 percent compared to the previous model as the cheapest edition starts from 15.38 million won ($13,520). But Renault Samsung said that since the vehicle is equipped with Nissan’s new H4Mk engine, which was designed to enhance torque in low rpms, and Xtronic Continuously Variable Transmission (X-CVT), which provides smooth and “stepless” ratio changes, it offers a good deal to customers.

“The new engine was developed to have better fuel consumption,” said Kwon Sang-sun, the director of Renault Samsung’s SM3/EV vehicle development. “We will produce this engine at our Busan plant and are planning to export to Turkey and Russia.”

Renault Samsung said the gas mileage for the new SM3 is 17.5 kilometers per liter (41.2 miles per gallon). The company emphasized that the ratio is better than for rival models and even better than city cars like the Ray, which has fuel efficiency of 13.5 kilometer per liter.

The SM3 is also equipped with features that connect passengers’ smartphones with the navigation system in the car. Music, videos or photos inside people’s smartphones can be played on car’s navigation screen with its “Phone 2 Car” function, the company said. Other features include a digital dashboard that changes color depending on speed, representing a first among Korean compacts, and an electronic parking brake.

While Renault Samsung tries to get into gear in the domestic market, Kia is also looking to allure local customers with the K3, which is the only fully new model from local carmakers in the second half.

The full specifications of the successor to the Forte are expected to be shown next month, but Kia has already disclosed some features.

The sister company of the Hyundai Motor Group said the K3 shares the same platform with Hyundai’s Avante and will also have a 1.6-liter GDi engine with a six-speed automatic transmission, but its gas mileage could be better. 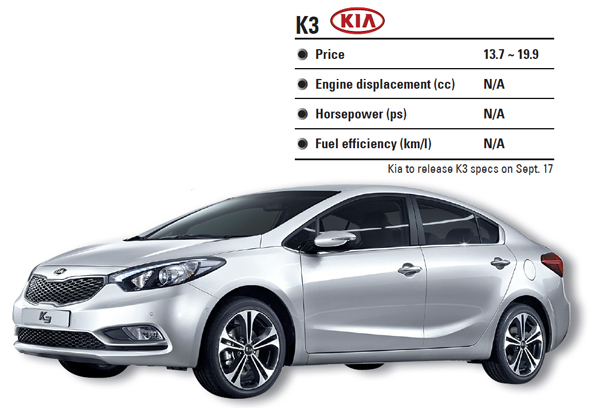 Also installed is the company’s UVO system, an infotainment system that controls multimedia and reveals the status of the car’s various systems via voice- and touch-activated features. This system was previously installed in big cars like the K9 and Sorento R. The No. 2 Korean automaker also installed LED Daytime Running Light (DRL) in the K3, which would be the first time that such a feature is included in a local compact car.

Kia said that it plans to sell 5,000 units of the K3 per month, which far exceeds Forte’s average monthly sales of 2,000 units.

“We are planning to raise the K3 as the best-selling model in the future,” an employee from Kia said. “Not only in Korea: We will execute aggressive marketing overseas and sell 450,000 units per year worldwide.”

Meanwhile, to defend the best-selling crown, Hyundai Motor is putting more efforts in marketing its 2013 edition of Avante, which was released on August 10.

The No. 1 automaker in Korea recently hired London Olympic gold medalist Yang Hak-seon, who won Korea’s first ever gold medal in gymnastics, as its main endorser for the Avante. Hyundai also started an draw for customers who buy Avantes to travel around North America and South Africa. A total of 30 customers will be selected by lottery, it said.

The compact sold 64,651 units in the Jan.-July period, the best off all cars in Korea and nearly 10 percent of all passenger cars sold in Korea this year, according to statics from Korea Automakers Manufactures Association.