[INTERVIEW] Braving the elements to restore past

[INTERVIEW] Braving the elements to restore past 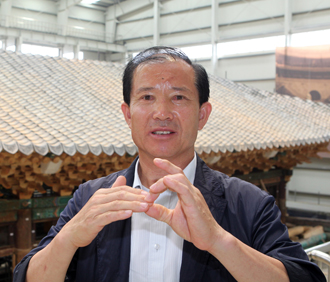 Lee Geun-bok is one of the foremost state-approved experts in roof tiling, a vocation that assumes more importance in Korea due to all the processes involved in restoring traditional structures. He is now busy patching up the country’s National Treasure No. 1 of Sungnyemun (also known as Namdaemun) which was torched by an arsonist in February 2008. The structure once served as the southern gate to the castle city of Seoul and has been under reconstruction for four years. Officials with the Cultural Heritage Administration say that about 80 percent of the work has been completed. By the end of this month, workers will have covered the lower part of the gate tower with tiles and finished painting the roof tiles, a process known as dancheong. The city hopes to unveil the newly-restored Sungnyemun by year’s end.

Overlooking the entire process is master carpenter Shin Eung-soo, while a number of experts including Lee are responsible for the manufacturing, application and painting of the roof tiles. Some 22,000 roof tiles are being used to rebuild Sungnyemun, with each weighing between six and seven kilograms (13.2 and 15.4 pounds).

The JoongAng Daily paid a recent visit to the site to sit down with Lee, who in 2008 was designated Korea’s Important Intangible Heritage No. 121 in honor of his unique expertise, to learn the finer points of his craft. He has also helped restore Seoul’s Geongbok and Changdeok palaces, Beopju Temple in North Chungcheong and Bongjeong Temple in North Gyeongsang. The art of applying roof tiles in Korea is known as beonwa.

A. It was my father. He was working as a carpenter, architect and plasterer in Imsil, North Jeolla. He always took me with him to construction sites. I would help him with chores and that is how I naturally got to know the process at such sites. It was then that I got to know what a pivotal role roof tiles play in buildings. When I became older, I wanted to learn more about traditional buildings, so I moved to Seoul. I worked as a building materials dealer at Dongamdong in Seongbuk District [in northern Seoul]. I worked mostly on houses in Seongbuk, Myeongryun and Hyehwa Districts, where there are many traditional houses. Afterward, I learned the trade from master Gi Seon-gil.

You participated in the original restoration work on Sungnyemun in 1997. How did you feel when you heard it burned down?

I saw it on TV as breaking news. I was shocked, and I immediately took a cab and went to the site. The firemen probably didn’t know who I was, but I dashed in like a crazy person.

I went around straightening up the water hoses so the water would spray further. For hours afterwards, I helped out wherever I could. I felt like my own body was on fire.

When Sungnyemun collapsed, words can’t describe how I felt. I’m sure the Cultural Heritage Administration and the public were also devastated. But the artisans who had worked on it were just devastated. I’d always thought of the buildings I had helped restore as being mine, in a way. So I would tell my friends, “All five ancient palaces in Seoul belong to me, so I’m the richest man in the world.”

What’s the hardest part doing a roof with tiles?

This is actually the most difficult part of the construction process for traditional structures, according to those in this field. First of all, you have to be on the roof, so it’s dangerous. Even if you take a rest, you do it on the roof. Until the 1980s, there weren’t even safety nets. So if you fall, you either become crippled or die. Under such conditions, we usually worked for 15 hours a day. The heat is another challenge. If the heat on the ground is 30 degrees Celsius [86 degrees Fahrenheit], up on the roof it’s closer to 40 degrees Celsius, because the roof tiles drive up the temperature. We usually curl our big toes so as not to slip off the roof, and to do that we wear shoes with thin soles. So it’s like walking on fire. It’s worse on Sungnyemun because of the makeshift building set up around it, which traps the heat. We sweat a lot, so we often eat coarse salt.

What causes you the most heartache when restoring cultural properties?

When we discover decaying wood. New wood may look better, but in fact, when it comes to wood, the older it is the better. It’s similar to how antiques get recognized for and valued by their age. That is why whenever we embark on restoration work, we see how much of the remaining wood we can retain. It breaks my heart when we have to throw away wood that’s survived and been used for a thousand years just because there are signs of decay. We also have to be careful when adding the tiling, because if we do it incorrectly, it can also cause the wood to rot, especially if there are leaks. Without leakage, Korean traditional structures can last for way over a thousand years.

Why is beonwa important in traditional structures?

It adds to their beauty and splendor. When you look at a building from far away, it’s the large tiled roof that catches your attention first. The roof tiles also determine the line of chunyeo [protruding eaves]. Even if the carpenter has made the curves of the roof beautifully, it is the technique of housing a roof with tiles that skillfully completes the line soaring toward the sky that we also see in beoseon [traditional Korean shoes]. However, what is most important is fixing the roofs so they don’t collapse. We’ve been using copper lines on Sungnyemun, which some people criticized us for, because it’s not a traditional method. But just because something was not done like that in the past, doesn’t make it wrong.

How are you passing down your expertise?

I’ve set up an education center in Goyang, Gyeonggi, where I teach beonwa.