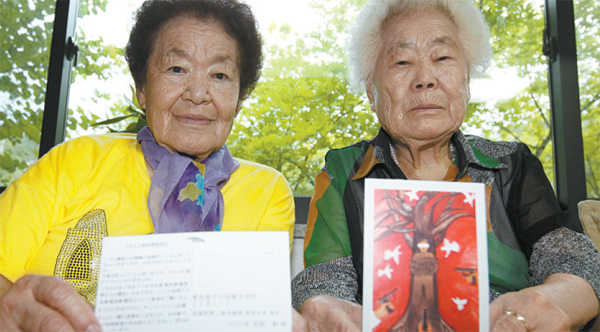 
A former Japanese prime minister said if he becomes the nation’s leader again, he would retract many official expressions of contrition to Korea for misdeeds in the past.

Shinzo Abe, a third-generation politician who was prime minister from late 2006 to late 2007, said in an interview with the Sankei Shimbun that if his Liberal Democratic Party wins the next election and he is reappointed prime minister, he will scrap all of the official statements issued by former leaders or officials that apologize for military acts and atrocities during World War II.

“We need to revise all statements, including those by former Chief Cabinet Secretary Kiichi Miyazawa, another ex-cabinet chief Yohei Kono and former Prime Minister Tomiichi Murayama,” he said. “We need to present an opinion as a new administration.”

Expectations are rising that the LDP, which governed Japan for most of its postwar history, will win the next general election against the ruling Democratic Party, which could come in November.

Abe has said he will run in the LDP leadership election scheduled for late September. He is also grandson of Nobusuke Kishi, prime minister from 1957 to 1960 and a member of the cabinet during World War II. As a conservative, Abe is taking advantage of recent friction with Korea over the Dokdo islets and the issue of women forced to be sex slaves (known euphemistically as “comfort women”) during World War II, and with China over disputed islands in the East China Sea.

The Miyazawa statement made in 1985 promised to “revise the Guidelines for Textbook Authorization,” accepting criticism from Korea, China and other Asian nations about biased history textbooks in schools.

The so-called Kono statement in 1993 apologized for forced sex slavery by Korean women and acknowledged that it was coercive for the first time, saying, “This was an act, with the involvement of the military authorities of the day, [that] severely injured the honor and dignity of many women.”

The apology by former Prime Minister Murayama in 1995 offered the minister’s “profound apology to all those who, as wartime comfort women, suffered emotional and physical wounds,” admitting the Japanese military forced the women to be sex slaves.

When asked in the interview why he wanted those statements revised, Abe said, “An excessive consideration about neighboring countries didn’t result in a sincere friendship with them.”

Abe’s remarks came after a member of the Japanese upper house proposed to revise the Kono statement, suggesting that Japanese politicians are moving into far-right positions over historical issues.

Cabinet minister Jin Matsubara, chairman of Japan’s National Public Safety Commission, said at a parliamentary meeting Monday that there is no specific proof of Japan’s military’s involvement in the slavery.

However, this is not the first time Japanese politicians have tried withdrawing apologies made by previous leaders.

As prime minister in 2007, Abe faced international condemnation when he attempted to scrap the Kono statement. He ended up backpedaling, saying, “I apologize for all people who suffered.”

A private association called Members of Civil Society that Urge Japan to Resolve Past Issues and the Matter of Comfort Women said in a statement that Japan is “distorting the truth and evading responsibilities” and demanded Japan “show a change in its acts regarding wartime crimes.”

They invited the politicians to their shelter in Gwangju, Gyeonggi, saying, “We want you to see the truth regarding the former comfort women’s history and have lunch with some of them in order to communicate with each other.”