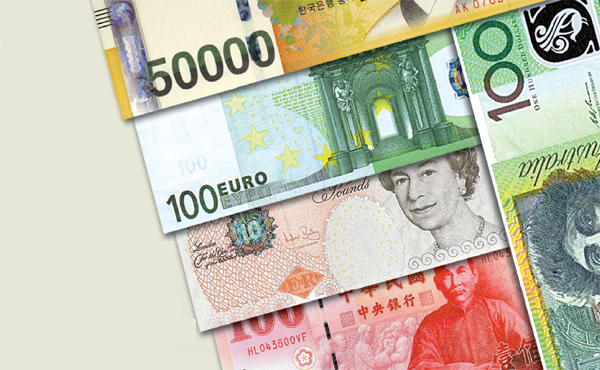 Although the yields on three-year and five-year Treasuries run below the Bank of Korea’s key interest rate of 3 percent, many investors are taking shelter in government bonds for their safety, regardless of yield, market analysts say.

Three-year government and five-year government bonds stood at 2.79 and 2.88 percent each as of yesterday, less than the BOK’s 3 percent key rate. The central bank determines the key interest rate and imposes it on seven-day repurchase agreements of government securities by commercial banks.

Market analysts say government bonds’ falling short of the BOK’s key rate goes against common wisdom of economics, which has that investors get more of a return the longer the maturity period.

But due to uncertain economic growth and Europe’s debt crisis disturbing financial markets, investors are content with the yields because the investments are safe.

“Yields on government bonds saw a sharper fall because the grim economic outlook has led investors to flock to Korean government bonds which are now regarded as a ‘safe asset’ in the global market,” said an industry source in the finance sector.

This is the fourth time that Korea has seen its Treasury bonds falling below key interest rates and all of them happened during economic downturns, such as in October 2008 when U.S. investment bank Lehman Brothers collapsed.

A similar phenomenon occurred between October and November 2004, shortly after the domestic economy recovered from the 2003 credit card crisis in which millions of card holders defaulted. 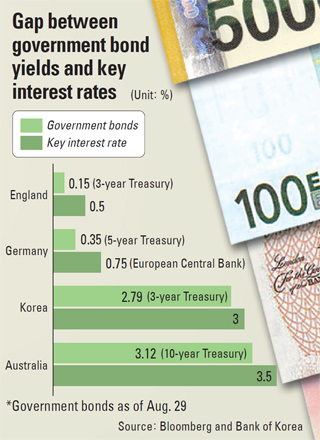 Market observers said this abnormality is usually temporarily but the recovery is slower this time. The phenomenon has lasted since July 6.

Other countries including Germany, Austria, Belgium and France are experiencing the same phenomenon.

“In the 1990s, Japan kept low-growth, low consumer prices and low interest rates due to the prolonged recession,” said Oh Chang-seop, an analyst at Meritz Securities. “Some major economies are likely to follow the footsteps of Japan.”

“Although the money circulation rate is on the upswing, there’s no perfect place except for government bonds for investors to make safe investments,” Lee said. “That’s why investors are continuing heavy buying in Treasuries.”

Meanwhile, the Ministry of Strategy and Finance announced yesterday it will issue 30-year Treasuries starting Sept. 11. The ministry set the spread of the nation’s longest Treasuries at 0.03 percentage points and 0.06 percentage points of 10-year government bonds’ yields.