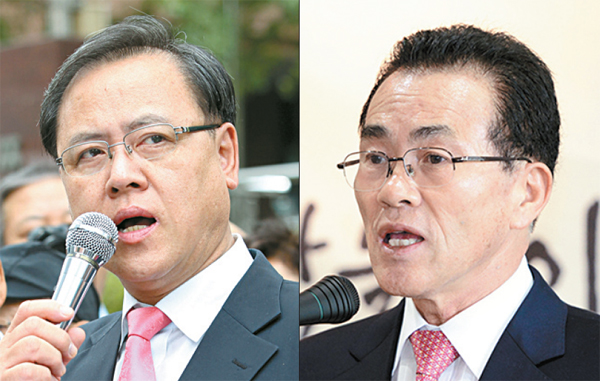 
Two influential politicians from the Chungcheong region decided to part with their minority conservative party and join the ruling Saenuri Party, signaling a realignment of the political landscape before the December presidential election.

“The Forward Unification Party has its limit because of its number of seats in the National Assembly,” Lee told the JoongAng Ilbo Tuesday. The party has five assemblymen. “Ahead of the presidential election, I want to join a party that can contribute to the advancement of the country. I and some other people who share the idea will make a decision as early as this week, as late as early next week.”

A news conference to formally announce his defection is scheduled for today.

The two-term lawmaker representing Asan, South Chungcheong, said he chose the Saenuri Party because its policies and ideology best fit his vision. “But I have never contacted Park Geun-hye, the party’s presidential candidate, or the Saenuri leadership,” he said.

Lee is a politician with deep ties to the Chungcheong region. He served as the chief policy maker and spokesman for the Liberty Forward Party, the predecessor of the Forward Unification Party. Before becoming a lawmaker, he also worked as the deputy governor of South Chungcheong and head of Geumsan County.

Mayor Yoo held a press conference yesterday and said he will leave the Forward Unification Party to join the Saenuri Party for the successful development of Sejong City. “It is an issue that requires enormous political power in the National Assembly and the administration,” Yoo said. “We don’t have the luxury of time to resolve this issue.”

Yoo won an overwhelming victory to become the first mayor of Sejong City in April and was sworn into office in July. He served as the head of Yeongi County in South Chungcheong for two terms.

In the 1997 presidential election, Kim Dae-jung won by forming an alliance with Kim Jong-pil, a political icon of Chungcheong.

At the time, Kim won 390,000 votes more than his rival, Lee Hoi-chang of the Grand National Party, the predecessor of the Saenuri Party. In the regional breakdown, Kim won 400,000 more votes in Chungcheong alone, indicating that winning the region led to his victory.

In the 2002 presidential election, Roh Moo-hyun won the region’s votes by making a pledge to build Sejong City as a new administrative capital for Korea.

The strategic importance of Chungcheong votes was also observed during Park Geun-hye’s unyielding battle against President Lee Myung-bak in 2009 and 2010 to maintain the Sejong City relocation plan. Lee wanted the government agencies to remain in Seoul and said that Sejong City would become a science and industrial center. He lost that battle.

In the National Assembly, 25 lawmakers represent the region, including Sejong City. Among them, 12 are Saenuri lawmakers, while 10 are with the largest opposition Democratic United Party. Three lawmakers are with the Forward Unification Party, but Lee’s defection will lower the number to two.

The migration of Lee and Yoo is expected to bolster the Saenuri Party’s influence in the region.

“I was told that five to six more heads of the local governments will leave the FUP and join the Saenuri Party early next month,” a Saenuri official said.

After its predecessor Liberty Forward Party only won three seats in electoral districts and two proportional seats in the April legislative elections, the party changed its name to the Forward Unification Party and appointed Representative Rhee In-je its new chairman.

In the process, Lee Hoi-chang, two-time presidential candidate of the Grand National Party and the former chairman of the Liberty Forward Party, severed his ties with the Chungcheong-based minority party. Representative Lee’s upcoming defection will further accelerate its crisis.

Officials from the Park campaign have stressed the need to engage the Chungcheong politicians.