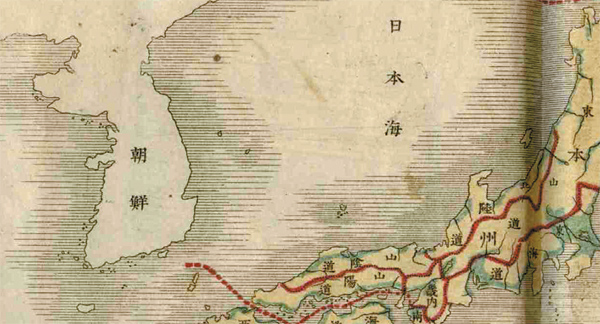 
Japanese textbooks and maps that affirm Korea’s sovereignty over the Dokdo islets have been shown to the public for the first time.

The Independence Hall of Korea, a state-run museum dedicated to the history of Japan’s colonial rule and Korean independence activists, displayed geography textbooks and maps used in Japanese schools in the late 19th or early 20th century on Tuesday.

Museum officials said the books were verified or actually manufactured by the Japanese Education Ministry and there is no mention of Japan’s claim of sovereignty over the Dokdo islets in the books.

The map is “A Specific Map of Japanese Regions,” created in 1888 by Tsuneburo Aoki.

“We collected the materials from an old private library in Tokyo in June,” Kim Yong-dal, a senior researcher at the hall, told the Korea JoongAng Daily. “Japanese Prime Minister Yoshihiko Noda says that Dokdo is originally Japanese territory and Korea is illegally occupying it, but we found that there’s no single Japanese textbook published before 1905 that claims Japan’s sovereignty over the islands. They just forcibly incorporated the islands during the Russo-Japan war in 1905.”

The “New Edition of Geography” clearly shows Dokdo within Korean waters, along with the neighboring Ulleung Island, distinguished from other Japanese islands like the Oki Islands.

In “A New Map For Geography Education in Elementary School,” there is no marking of Dokdo in the map of Japanese territory, while Taiwan is included, having been occupied in 1895.

However, “A Standard Map of Japan,” published in 1925 by Tokyo Kaishokan, a private publishing company, states that Dokdo belongs to Shimane Prefecture while Ulleung Island belongs to North Gyeongsang of Korea.

A Japanese map collector also claimed that Dokdo is not Japanese territory on Tuesday. Kuboi Norio, a 70-year-old teacher living in Osaka, produced the “Map of Great Japan,” which shows a string of Japanese islands including Okinawa, but which did not mark Dokdo and Ulleung Island within its waters.