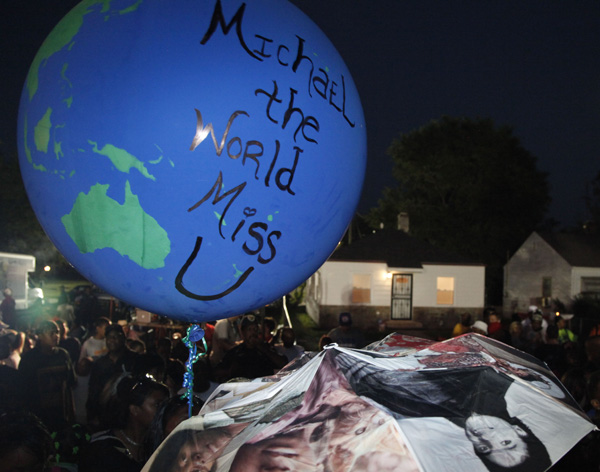 GARY, Indiana -The scene outside the childhood home of Michael Jackson resembled a party as fans joined members of the pop star’s family for a vigil Wednesday, which would have been his 54th birthday.

Fans danced to Jackson’s music prior to the arrival of his children and mother at the house at 2300 Jackson St. where the King of Pop, his siblings and their parents lived until 1969. In the days after Jackson’s death in 2009, the singer’s admirers piled stuffed animals, flowers and photos outside the tiny home.

Among those at the Wednesday night vigil was Andrei Tejada, 32, a Chicago veterinary technician student who was pleased that Jackson’s relatives attended.

“They still remember where they started and it shows they appreciate where they started. It’s a humbling experience to know they are here,’’ said Tejada, who added that she visits the Jackson childhood home once a month.

Other events planned by the family in Gary include a dinner on Friday and concert on Saturday.

Before the vigil, Jackson’s children, 14-year-old Paris and 15-year-old Prince, were given blue “Team Gary’’ T-shirts by Mayor Karen Freeman-Wilson as they posed for pictures at a casino overlooking Lake Michigan.

“We just want you to know how much he meant to us and the city of Gary,’’ the mayor said.

Paris and Prince didn’t speak during the brief presentation. Later, in the moments before the vigil was to start, the two signed autographs outside the Jackson home. A large crowd formed around them, with fans shoving books and posters in the teens’ faces.

The Rev. Jesse Jackson showed up at the tribute, stopping in the crowd before the vigil to pose for a photo with a Michael Jackson impersonator.

Michael Jackson spent the first 11 years of his life in Gary. The family moved out of the city known for its steel mills after the Jackson 5 struck it big in 1969 with the release of their first album.

Aside from two concerts the Jackson 5 played at West Side High School in 1971, the only time the singer returned to his hometown was in 2003, when plans for a Michael Jackson Performing Arts Center downtown were announced. It was never built.

“Gary, you are family, you always will be, I love you,’’ Jackson said at the time.