Would you use a clothes dryer?

Would you use a clothes dryer? 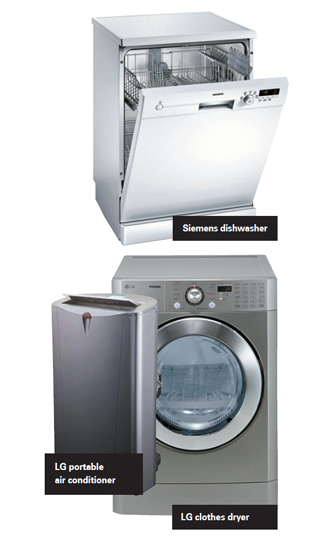 Top to bottom: A dishwasher, clothes dryer and portable air conditioner, all basic electronic home appliances in North America and Europe, but relatively obscure in Korea.

The electronic home appliances industry is eyeing the unique aspects of cultures from different regions.

Preference for consumer products varies according to countries, which extends to the favored colors and designs of TVs and washing machines.

An Australian office worker known as Sanchez, working for a foreign company here, was astonished when he first moved to the country.

He could not find any dishwashers or clothes dryers, which every household had back home, and were common at department stores.

Home appliances companies also agree that Korea is the only country of which per capita exceeds $20,000 but has poor demand for dishwashers and clothes dryers.

On the other side of the fence, another office worker surnamed Kim, who has been working for the U.S. branch of his company since last month, said that he finds it too uncomfortable to use the bathroom at work.

Already accustomed to using a bidet, he finds it non-refreshing to use an American toilet without one.

Since differences in using home appliances vary greatly from region to region, consumer electronics companies are investing significant amounts of time in finding the right products to fit the particular tastes of various countries before developing overseas marketing strategies.

“According to survey results, a considerable number of Korean consumers have poor preconceptions of dishwashers and clothes dryers, a reason why the sales of the two products are particularly poor,” said an employee at Miele Korea, Germany’s premium home electronic devices company.

Such prejudice came from their disappointing cleaning ability as well as the excessive water usage that characterized domestic dishwashers when they were first introduced.

In contrast, in European countries and North America, dishwashers are as common as washing machines.

“Thanks to the advancement of technology, it is far better to use dishwashers than to avoid them in order to save water and cut down on energy usage,” said an employee at Siemens, the largest Germany-based electronic home appliance company.

“Using dishwashers could also prevent food poisoning in the summer season as they sterilize dishes,” he added. 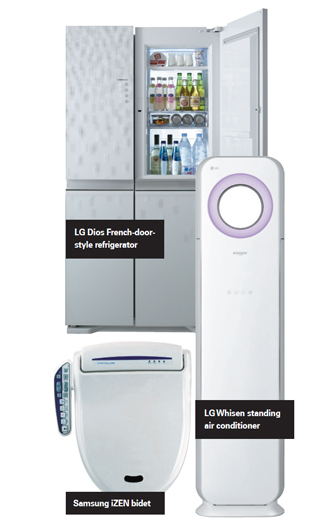 Top to bottom: A French-door-style refrigerator, bidet and standing air conditioner. Demand for them is greater in Korea than in North America and Europe. Provided by the company

According to an experiment done by Korea Testing Laboratory, the average amount of water usage accrued when washing dishes by hand was 101.2 liters (26.7 gallons), based on a family of four, whereas a washing machine used only 16.6 liters of water on average for the same amount of dishes. Also, when using hot water in the winter, the electricity usage involving in hand washing dishes amounted to 2.5 kilowatts, while that of washing machines only reached 1.06 kilowatts.

Clothes dryers suffer from the same preconceptions. There are even consumers who are afraid to activate the drying function on their washing machines, worried that it might drive up their electricity bill.

“A 10-kilogram dryer has the capacity of drying out five shirts, eight jeans and about 20 towels all at once,” said an employee at LG Electronics.

The size of domestic clothes dryer market is in its infancy with only 100,000 units in the market and very little change during the last three-year period.

Samsung and LG have launched their own clothes dryer lines but Samsung is only selling them in foreign markets.

Conversely, there are home appliances of which overseas sales are sluggish but remain popular in the domestic market. The bidet is one of these products, selling like hotcakes in Korea and Japan.

However, in other countries like America, homes that have stand-alone air conditioners are rare. The market is dominated by central air systems or window ACs instead.

Samsung and LG are producing new stand-alone air conditioners every year as their main models in response to those demands.

In the case of stand-alone air conditioners, design is becoming more important as they are conspicuous and have sufficient space to allow for external decoration due to their large sizes.

In recent months, however, when the sales of ACs in the United States soared by 20 percent due to the extreme heat wave, new forms of air conditioners also attracted customers.

The cooling effects of wall-mounted and window ACs are bound to be lacking in large living rooms or spaces, as their cooling area is smaller. Due to these problems, portable ACs have been popular in other countries.