Police crack down on a Cyberpimp

Police crack down on a Cyberpimp 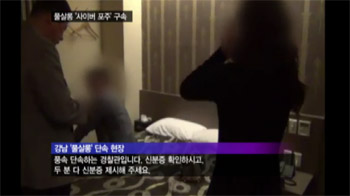 Police arrested a man for being an electronic pimp by running a Web site that had a plethora of details about prostitutes, including contact numbers, prices and breast size.

The Seoul Metropolitan Police Agency said yesterday they apprehended a 34-year-old man identified by his surname Song for running the Web site dubbed Yeotop, which they said facilitated prostitution between the site members and 400 places of prostitution. Police said the Web site was opened in 2008 and has some 200,000 members. Song allegedly was paid by pimps. Prostitution is illegal in Korea, as is pimping.

The police said Song has experience in running brothels and five criminal convictions including one for involvement with prostitution in 2009. Song ran an Internet blog that offered pornographic files, and then he realized that people visiting such Web were looking for prostitution. He opened a separate Web site and started posting information about prostitutes.

When the Web site became popular, pimps asked Song to upload their information and offered discounts to customers who were registered as members of the site. The pimps paid 300,000 to 600,000 won ($529.2) monthly and Song earned a total of 10 billion won in the last five years.

The police said Song eluded censors by using servers in China. He also changed the domain of the Web site every month and distributed the new address through Yeotop’s Twitter account.

The police found Song when they were tracing a money transfer from a pimp. They eventually arrested him while he was withdrawing cash from an ATM machine in Mapo District, northwestern Seoul.

Police believe there are other people involved in Song’s operation. Several bank accounts Song used are under foreigners’ names.

“We are looking for Song’s accomplices and also tracing the money,” a spokesman for the Seoul police agency said. The Web site was shut down by the police on Wednesday.