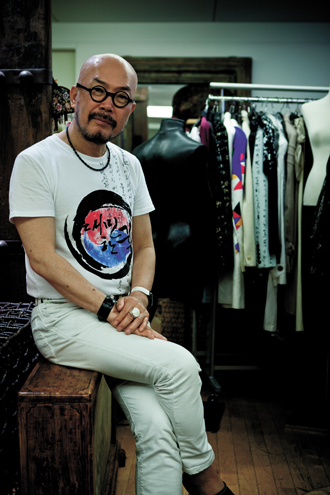 Those words bear testament to the essence of fashion in New York, where contrasting notions of old and young can not only coexist but thrive, in a city where even the most experimental clothes can be a fashion and commercial success. The city has become a mecca for designers seeking international attention, and the biggest showcase is the New York Fashion Week.

And Korean designers have been pursuing their share of the spotlight through Concept Korea, sponsored by the Ministry of Culture, Sports and Tourism, Korea Creative Content Agency, Korea Research Institute for Fashion Industry and Daegu Metropolitan Government. The program aims to help designers introduce their clothing at the claimed fashion week in an effective way.

The JoongAng Sunday sat down with the veteran designers Lie and Son to discuss Korean fashion and the New York show.

Lie Sang-bong, just in from his show in London, wears a T-shirt with the Taegeuk symbol that is on the Korean flag. 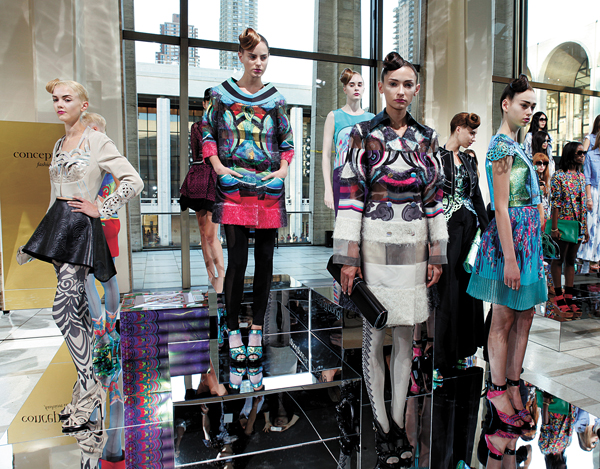 Lie Sang-bong’s new line evokes childhood memories through handicraft, a departure from the designs for which he is known. Provided by Jeon Myung-jin


Q. You showcase your clothes every year. How has the show changed?

A. This is the fourth season. The collection gets better as time goes by. Even if people don’t recognize each designer’s name, they know about “Concept Korea.” This is a hard-fought achievement through steady participation. We didn’t attend on and off, we maintained our presence.

What does a group collection like “Concept Korea” mean to you?

There is a difference between New York and Europe. Paris emphasizes creativity, while New York represents pragmatism.

I wanted to participate in the New York collection because that’s where American designers like Alexander Wang, Jason Woo and Derek Lim rose to fame. The timing was also great. “Concept Korea” had just begun when I opened an office in New York.

What kind of clothes are you looking to present?

I want to evoke childhood memories this time, staying away from Korean themes for now. To do that, I will use handicraft and feature origami-inspired wear.

Don’t you think you have focused too much on Korean themes?

When I show a Korean traditional quilt work to foreigners, they are reminded of paintings by Mondrian. People in Peru think of the vivid colors of dancheong as their own art. Beauty is appreciated when people outside Korea think, “Korean-inspired themes are beautiful, but they also have something in common with us.” This idea is also the key to creation for me.

You have worked with other up and coming Korean designers for this fashion show. How do you feel?

This is a good opportunity for me. I can share ideas and communicate with them.

Some people assume you are exempt from the screening process for “Concept Korea.”

No, that’s not true. Some question whether I should bother to go through the judging process. But it should be fair.

Do you have suggestions for “Concept Korea?”

I think more opportunities and support are needed for emerging designers.