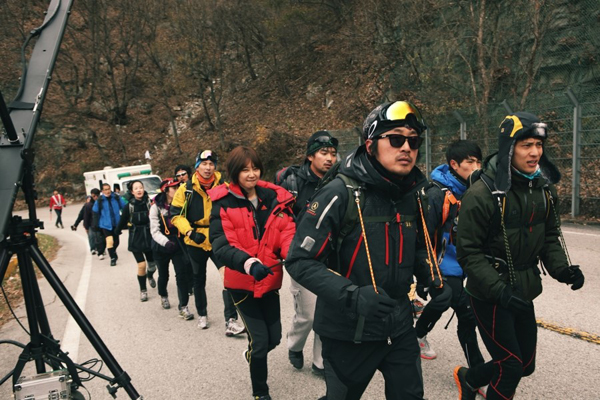 
There may be actors and actresses better looking than Ha Jung-woo and Kong Hyo-jin in the nation’s film scene, but it’d be hard fought to find anyone more versatile.

When news broke of the cast for the documentary film “577 Project,” which follows a group of actors walking 577 kilometers (358 miles) across the nation, many fans swelled in anticipation of a reunion of Ha and Kong.

The two actors share the spotlight once again after “Love Fiction,” a quirky love story released earlier this year. This unconventional rom-com centered on a woman who grows her armpit hair (played by Kong) and a man (Ha) who finds inspiration in his hairy muse.

It is indeed a pleasure to see the talents together again on the big screen, but making a documentary on cross-country walking - well, at first that didn’t seem like such a good idea. “577 Project” features two A-list actors who usually keep a low profile off the set, but aside from that, nothing seemed original.

Documentaries like “577” have been around for decades, all with similar formulas: A group of people, all with different stories to tell, walk miles and miles with blisters on their feet. Some fall behind, but others finally make it through in the end.

They hug and embrace with tears rolling down their cheeks at the end of the journey. And through the highs and lows, they find messages of their own.

But “577 Project” skillfully avoids these cliches. Instead, it weaves in fictional segments in a smart and entertaining way. Just when you’ve had enough of the walking and are about to get up and stretch your own legs, the film masterfully jumps entertaining clips like talk show segments.

The 16 actors, including Ha and Kong, are physically and mentally challenged throughout the journey. The film, however, allocates much of its running time to the pleasures of the trip instead of spotlighting their difficulties or pain.

From the beginning to the end, the film stays true to its genre: comedy.

The most hilarious parts are four short commercials that are placed throughout the 99-minute movie. Instead of product placement, the low-budget film directly and obviously promotes certain brands that sponsor their trip in a consciously ridiculous way.

“577 Project” also does a great job with its music selection. Directed by producer, composer and singer Kim Jung-bum, whose stage name is Puditorium, the film’s every score is empowering, making you feel as though you should embark on a journey of your own.

Soaking in the raw emotions and everyday personalities of Ha and Kong is one way to enjoy the film, but the biggest virtue of the project is that it enables obscure actors and actresses, mostly Ha’s college friends, the chance to reinvent or make a name for themselves. In the beginning, many may wonder who some of the participants are and how they became part of the cast. But by the end, I found myself wanting to know more.

The idea for the 20-day trip started with a film award one year ago. Ha stepped onto a stage to announce the award for the best actor of the year. He was also nominated, but Ha said there was a small chance of winning it again because he had already won the best actor award from the previous year.

Ha promised he would walk cross-country if he won the award again. And when Ha announced himself as the winner, in shock, he began thinking about how to fulfill his pledge.

You will surely thank Ha for following through with his promise when the closing credits roll.