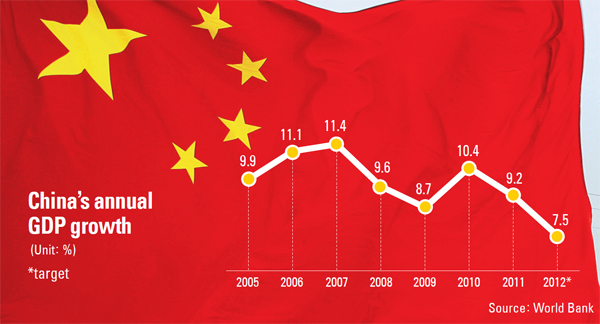 China’s economy is showing mounting signs of deterioration from manufacturers to banks, raising the risk that outgoing Premier Wen Jiabao will miss his growth target for the first time since taking office in 2003.

Manufacturing unexpectedly shrank for the first time in nine months in August, a government survey showed on Saturday. The reading added to evidence of weakness after a surfeit of unsold goods left near-record rubber stocks at China’s main hub for the commodity and financial strains saw a 27 percent jump in overdue loans at the five biggest banks in the first half.

China has not failed to exceed the Communist Party’s annual growth target since the throes of the Asian financial crisis in 1997-8, and a miss of this year’s 7.5 percent goal may complicate a once-a-decade leadership handover. The outgoing generation of policy makers has held back on stimulus this year as it seeks to rein in a property-market boom and avoid a jump in bad debt.

“If there is no further policy response, it’s very likely that GDP growth will fall below the target and this administration will likely hand over a hard-landing economy to the next one,” said Liu Li-gang, chief China economist at Australia & New Zealand Banking Group in Hong Kong. The central bank should “revert to cutting banks’ reserve requirements more aggressively to revitalize the economy. If we have a cut soon we could have good fourth-quarter growth.”

The risk of below 7 percent expansion could potentially trigger financial distress or even a crisis if local governments run out of money, said Liu, who has worked for the World Bank and Hong Kong Monetary Authority. Underscoring a buildup in strains, Construction Bank reported its overdue loans in the eastern manufacturing and export hub of the Yangtze River Delta doubled to 16.8 billion yuan ($2.6 billion).

Liu cut his estimate for full-year expansion to 7.8 percent from 8.2 percent after the release of the official manufacturing purchasing managers index. The gauge fell to 49.2 from 50.1 in July, below the estimates of 24 of the 25 analysts in a Bloomberg News survey. The dividing line between expansion and contraction is 50.

The Shanghai Composite Index, China’s benchmark stock gauge, has dropped 6.9 percent this year on concern the slowdown is hurting corporate earnings. It fell 2 percent last week to the lowest level since February 2009, and is heading for its first three straight years of annual declines since the Shanghai Stock Exchange opened in December 1990.

The yuan, which has weakened 0.9 percent this year, is on pace for its second annual decline since the country overhauled the exchange-rate system in 2005 and removed a peg to the U.S. dollar.

Asia’s next two largest economies are also showing signs of slowing. Japan’s industrial production unexpectedly slumped in July, data showed Friday. India reported the same day that its GDP increased 5.5 percent last quarter from a year ago, down from an 8 percent pace in the same period in 2011.

Economic growth has slowed for six quarters to 7.6 percent in the three months through June from 9.8 percent in the fourth quarter of 2010 as Europe’s debt crisis crimped exports and a prolonged crackdown on property speculation damped domestic demand.

The slowing will continue this quarter to 7.4 percent, according to Lu Ting, at Bank of America in Hong Kong. He said there’s a risk the full-year rate will be below 7.5 percent, and growth may miss his forecast if the government “fails to roll out further policy measures in the next few months.”

China’s government has refrained from a stimulus on the scale of the 4 trillion yuan package unveiled during the global financial crisis that helped keep growth above 9 percent in 2008 and 2009 while the rest of the world slumped.

Wen said in October the government would “fine tune” economic policies. Since then, banks’ reserve requirement ratios have been cut three times, approvals for investment projects have been accelerated and social security and health spending have risen. The central bank lowered interest rates in June for the first time in three years and cut them again in July.

“The lack of really decisive bold action over the last few months signifies at least in some part the government is content with a growth figure closer to the actual target than perhaps they would have previously liked,” said Alistair Thornton, an IHS Global Insight economist in Beijing. “They’ve got sufficient clout to turn things around if they really want to and they’ll only really want to when the labor market feels the impact.”

A growth rate of 7.5 percent to 8 percent would still compare well with the world’s biggest economies. The International Monetary Fund’s latest forecasts, published in July, put U.S. expansion this year at 2 percent and Japan’s at 2.4 percent with the euro area contracting 0.3 percent.

Even so, China is at risk of repeating the experience of Korea in the 1990s, where a slower pace of growth resulted in a “significant deterioration” in profits as companies were burdened with higher fixed costs from capital spending booms aimed at supporting the economy, according to Duncan Wooldridge, chief Asia economist at UBS AG in Hong Kong.

“China’s reluctance so far this year to replicate the investment surge in 2009 is a good thing even if it delays a cyclical improvement by a few quarters,” Wooldridge wrote in the Thursday note.

With less than seven months left in office, Wen may need to leave the task of reviving growth to a new crop of government officials due to take over in March 2013 after the annual session of the National People’s Congress.

“There have been rising concerns within policy circles in Beijing that the government’s growth target of 7.5 percent for the year may be at risk,” said Ramin Toloui, the Singapore-based global co-head of emerging-markets portfolio management at Pacific Investment Management, which manages the world’s largest bond fund.