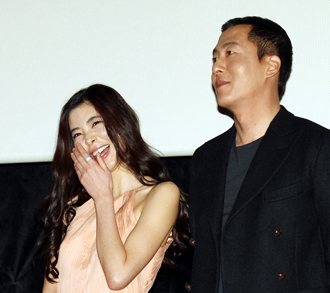 
Another co-star couple has been revealed. Agencies of both Kim Ju-hyeok and Kim Gyu-ri, actors in “God of War,” confirmed that romance has blossomed between the two.

“They’ve been dating for about three months now,” the agencies said.

Both agencies further added that the two were drawn to one another while spending time on the set of the MBC weekend period drama.

While the agencies denied that a wedding would soon follow, they did ask the public for their “support for the couple.”

As the news broke, netizens have claimed that the celebrity couple has been spotted enjoying dates around town.

Although they met on set, Kim Gyu-ri is no longer part of the drama; she appeared in her last episode in July.

Since departing from the program, the 33-year-old actress has been busy promoting the cosmetics brand Bobbi Brown.