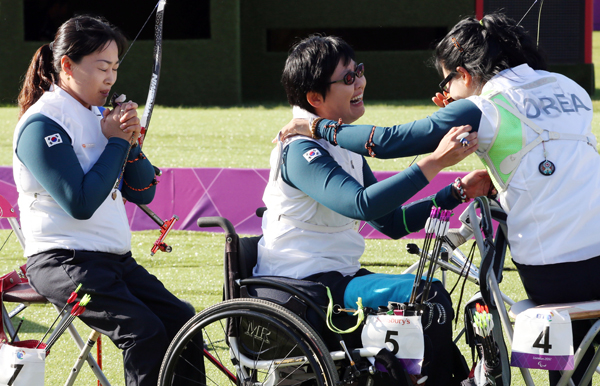 Archers Kim Ran-sook, Ko Hee-sook and Lee Hwa-sook, from left, celebrate after winning the women’s team gold against China 199-193 at the Royal Artillery Barracks, Wednesday, in London. It was Korea’s first archery gold at the London Paralympics. [YONHAP]


The Korean women’s archery team won a gold medal at the London Paralympics on Wednesday, overcoming China and continuing the country’s longtime dominance in the sport.

The gold, the only gold medal Korean archers will bring home from the London Paralympics, puts Korea behind Russia in the gold medal standings in the sport.

Korea failed to win the other three gold medal events and added two silver medals. China, which entered the women’s team final with one gold, settled for one gold and one silver.

It is the first Paralympic gold medal that Korea has won in the women’s team archery competition.

At the Athens Paralympics, Korea won a bronze medal in the sport and then a won silver medal at the Beijing Paralympics.

Korea’s men’s archery team was initially considered to have a better shot at a gold medal, but the team, composed of Jung Young-joo, Kim Suk-ho and Lee Myeong-gu, lost to Russia 206-200 in the Men’s Team Curve final on the same day and won a silver medal.

Korea’s male archers won the team competition at both the 2004 Games and 2008 Games.

In the individual events held early this week, all Korean archers, male and female, were disqualified in the preliminary stages, except for Lee Hwa-sook, who survived through the final and won a silver medal in the women’s individual event.

The gold in the women’s team event salvaged Korea’s record of winning at least one gold medal in archery at the Paralympics since 2008.

Since its first Paralympic Games in 1972, Korea has won 16 gold medals in archery out of its 116 gold medal total as of yesterday.

Earlier at the London Paralympics, Lee In-kook, Korea’s biggest gold medal favorite in swimming, was disqualified in the men’s 100-meter backstroke final for being late.

With two golds on Wednesday, Korea has collected six so far and was placed in 13th in the gold medal standings at the London Paralympics together with Italy.

Korea has also collected five silver and six bronze medals so far at the Games.

Korea’s goal at the London Paralympics is a top-13 finish with 11 gold medals. Korea’s best record at the Paralympics is seventh in the 1988 Seoul event.

China is a distant frontrunner with a total of 60 gold medals. It also won 50 silver medals and 49 bronze medals.

Russia sets behind them with 28 gold medals, followed by the host Great Britain with 25 gold medals.

The London Paralympics will wrap up the 12-day run on Sunday.