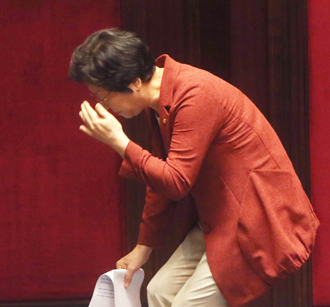 Representative Hyun Young-hee almost collapses yesterday at the main chamber of the National Assembly on her way to her seat after pleading her case to fellow lawmakers. By Kim Kyung-bin

The National Assembly yesterday approved an arrest warrant for an independent lawmaker suspected of paying for a party nomination ahead of April 11 legislative elections.

In a plenary session, the arrest motion for Representative Hyun Young-hee was approved by a vote of 200 to 47, with five lawmakers abstaining and 14 votes counted as invalid.

The 61-year-old lawmaker, who was elected as a proportional representative for the ruling Saenuri Party in the April 11 poll but was expelled later, has been under investigation for allegedly giving 300 million won ($264,500) to former Saenuri lawmaker Hyun Ki-hwan for her nomination.

Hyun Ki-hwan, who was given the task of screening lawmaker hopefuls for Saenuri, maintains he never received any money. Despite their shared surname, the Hyuns are not related.

Both were expelled by the party last month for involvement in the scandal that tarnished Saenuri’s image.

State prosecutors arrested a middleman for pocketing 50 million won in the transaction, although no legal action has been taken against former lawmaker Hyun for lack of evidence.

Prosecutors submitted the arrest motion for lawmaker Hyun to the legislature on Aug. 27 and it was forwarded to the plenary session on Monday.

Under parliamentary rules, a motion to arrest a lawmaker must be voted on within 72 hours of it reaching the plenary session.

The arrest marks the second time this year the National Assembly has approved the arrest of a member and is the 11th such motion to be passed since 1953.

In South Korea, courts need to get parliamentary approval to jail a lawmaker while the National Assembly is in session.