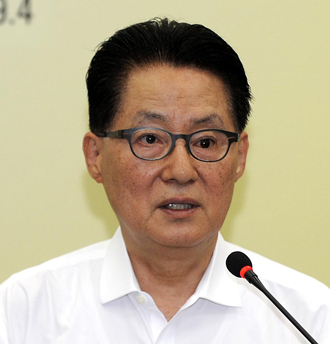 Park Jie-won, floor leader for the largest opposition party, allegedly received bribes from a former major shareholder of a debt-ridden savings bank last year, prosecutors said, in exchange for using his influence to prevent the troubled bank from being shuttered.

The 70-year-old Park, a high-profile politician of the Democratic United Party and a former aide to the late president Kim Dae-jung, was recently in the spotlight for another graft scandal regarding people who paid for nominations in last April’s general election.

The Supreme Prosecutors’ Office yesterday said that Lim Kun-woo, 65-year-old former chairman of Bohae Brewery, told prosecutors that he “visited Park’s office in March 2011 and asked him to prevent regulators from shutting down the bank, giving him 30 million won ($26,445)” as a reward.

Lim said that as soon as Park was given the money, “he made a phone call to Chairman Kim [Seok-dong of the Financial Services Commission] on the spot.”

Lim’s brewery company is an affiliate of Bohae Mutual Savings Bank, which was suspended in February 2011 because it was insolvent and for other financial irregularities such as making illegal loans.

Since February 2011, regulators have suspended 20 savings banks for similar reasons.

Prosecutors said that when the deal was made between Lim and Park, Oh Mun-cheol, former chairman of Bohae Mutual Savings Bank, was also there.

Prosecutors assume that Lim and Oh wanted Park to use his influence to prevent the FSC’s final decision to shut the bank down for good or postpone it long enough so that Lim would have time to get a loan to salvage the bank.

On Feb. 19, 2011, the FSC ordered the suspension of the 1-trillion-asset Bohae bank, but it didn’t immediately order a shutdown. On Sept. 5, the bank was closed permanently and merged into Yes Bank, a state-run savings bank established by the Korea Deposit Insurance Corporation.

Prosecutors asked Park if he received the money from Lim during questioning on July 31, and Park denied it, prosecutors said. They also questioned FSC Chairman Kim in mid-August, but didn’t give details to reporters.

In June, prosecutors said Lim had admitted asking Park for help for the bank but denied giving him any money. He changed his testimony after a special investigation was carried out in July.

Park told Yonhap News Agency yesterday, “I have never received any money and made such a phone call. It’s a false rumor against an opposition lawmaker ahead of the presidential election plotted by a certain party.”

Prosecutors said they will request an arrest warrant for Park soon.

But the law states that in order to detain an incumbent lawmaker, prosecutors need to seek a motion passed by other lawmakers at the National Assembly, which rarely happens in Korea.