In its latest coverage of the Dokdo issue written by Japanese editor Takashi Yokota, the U.S. news magazine Newsweek sided with Tokyo’s stance in the bilateral diplomatic conflict, which escalated after Korean President Lee Myung-bak’s unprecedented visit to Dokdo on Aug. 10. 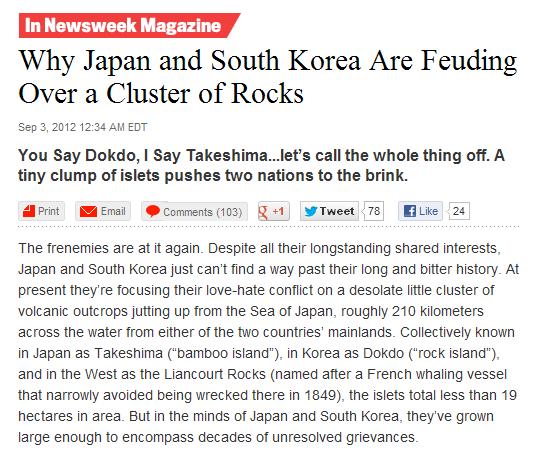 In the article titled “Why Japan and South Korea Are Feuding Over a Cluster of Rocks,” the Japanese writer consistently criticized Seoul’s stance, calling it “hard to understand.” He also quoted a former U.S. ambassador to Tokyo as saying, “Koreans are behaving irrationally.”

Rejecting the Newsweek article as “wrong” and “biased,” the Seoul government expressed regrets.

“The article is based on very biased perspectives. The foreign ministry will refute it in an appropriate way,” said Seoul’s Foreign Ministry spokesman Cho Tai-young, without elaborating.

He also said the government will continue efforts to proactively launch a promotion campaign “to let the people around the world know the truth about Dokdo and our basic stance.”

Upon the controversy surrounding the story, the editor of the Korean version of the magazine issued in a statement, explaining the reason for its decision not to publish the article.

“The article distorted the truth, far from fair and precise reporting,” said editor Suh Jung-hyun. “The Asian version of Newsweek fails to reflect Korea’s stance. It is very regrettable.”

Korea has rejected Japan’s claims to Dokdo as amounting to denying Korea’s independence from its 1910-45 colonial rule because the country reclaimed sovereignty over its territory, including Dokdo and many other islands around the Korean Peninsula, when it regained independence.

Korea has kept a small police detachment on Dokdo since 1954.

Meanwhile, the Korean government said it would “review” a possible proposal from Japan to hold bilateral high-level talks on the sidelines of the upcoming Asia-Pacific Economic Cooperation (APEC) summit.

The APEC summit is set to be held in Vladivostok, Russia, from Sept. 8-9, in which both South Korean and Japanese leaders will participate.

“So far, we have not received any suggestion from Japan about a summit or talks between foreign ministers,” spokesman Cho said, dismissing such speculations raised by some Japanese media.