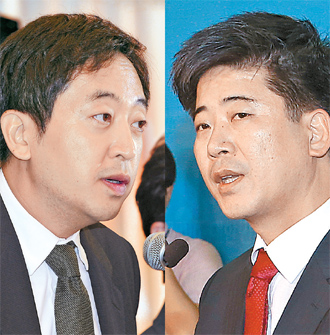 Keum Tae-sup, left, and Jeong June-guil studied law together and exchanged chummy text messages, according to photos released by the Saenuri Party. [NEWSIS]

A day after Ahn Cheol-soo’s legal adviser said he received a blackmail threat from a member of the Park Geun-hye campaign team, there were few questions about the blackmail allegation at a National Assembly hearing. Political observers expected the blackmail issue, and the possibility that Ahn was spied on by the government, to dominate the hearing.

On Thursday, Keum Tae-sup, a legal adviser to the software mogul-turned-academic who may run for president in December, told a press conference that a member of Park’s campaign team, Jeong June-guil, phoned him Tuesday and threatened to reveal dirty secrets about Ahn if he declared a presidential candidacy. Local media said the blackmail threat could totally upend the presidential race.

But the controversy surrounding the blackmail allegation subsided quickly yesterday after the Saenuri Party explained that Keum and Jeong are close friends and the phone conversation took place as a casual chat between friends.

Yesterday, the party released photos of chummy text messages exchanged between Jeong and Keum on Aug. 27 and 28 as proof that the phone call was not an attempt at blackmail. Keum and Jeong studied law together at Seoul National University. 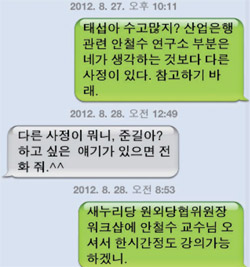 Medicom, a market research company, analyzed the top 50 retweets yesterday, and 65.7 percent of them supported the Saenuri Party in the blackmail controversy while 27.8 percent supported Ahn. Considering that Twitter users are frequently young and liberal - Ahn has a big support base on Twitter - the reaction was the opposite of what the media expected a day earlier.

Park, the Saenuri Party’s presidential candidate, tried to play down the incident yesterday.

“Based on my understanding, the two just had a private chitchat,” said Park.

“I don’t understand why [Keum] is overinterpreting a private conversation,” she said. “Aren’t the two long-time friends?”

On the previous day, Park said she “didn’t understand the disclosure” and that “Jeong isn’t in the position to threaten or pressure someone.” Jeong is a public affairs official for her presidential campaign.

According to Keum, Jeong said he knew of an affair Ahn was having with a woman and a bribe he paid to an official of the state-run Korea Development Bank to receive investment in AhnLab, the antivirus software company started by Ahn.

Other ruling party lawmakers tried a counterattack on Ahn.

The main opposition Democratic United Party was notably passive on the issue to the public. While most DUP leaders ignored the case, only DUP Representative Hong Ik-pyo raised the suspicion at the National Assembly hearing yesterday that Ahn may have been subject to illegal surveillance.