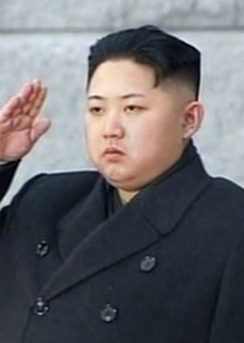 The youngest son of the late Rev. Moon Sun-myung left for Pyongyang yesterday to accept condolences from his relatives there and possibly the North Korean government, Seoul’s Unification Ministry said yesterday.

Moon Hyung-jin, who took over the leadership of the Unification Church in 2008, and Park Sang-kwon, president of Pyeonghwa Motors, a car-making company in the North owned by the church, crossed the border at Paju, Gyeonggi, yesterday morning, for a two-day visit to Pyongyang. Both are U.S. citizens.

“We approved a North Korean visit,” the ministry spokesman said in a press briefing.

Park visited Pyongyang earlier in the week, when he was informed that the North would not send a delegation to the South for Moon’s funeral on Sept. 15.

Moon, the founder of the Unification Church, died at the age of 92 on Monday. Born in what is now North Korea, Moon established special relations with the North ever since he met with North Korea founder Kim Il Sung in 1991. When North Korean leader Kim Jong-il died last December, Moon Hyung-jin went to his funeral in Pyongyang. The church operates the auto manufacturing venture and a hotel in Pyongyang.

“Rev. Moon’s relatives are living in the North and we decided to set up a funeral hall in Pyongyang,” said Ryu In-yong, an official from the Unification Church. “The visit would be more significant if Moon [Hyung-jin] would be able to meet leading members of the North.”

“The possibility [of Moon and Park meeting North Korean authorities] is open but it’s an issue to be dealt with by the Unification Church,” the ministry spokesman said.