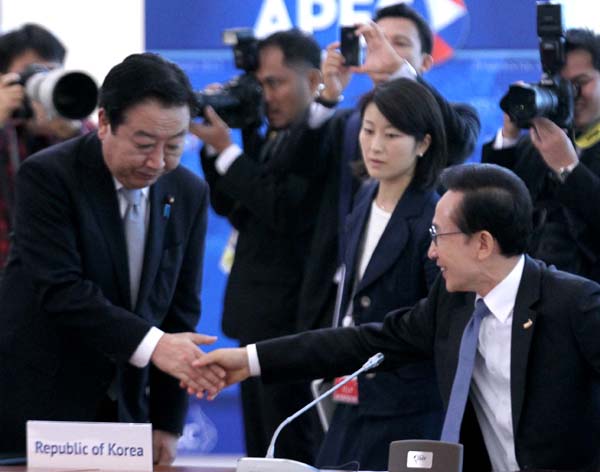 
The United States urged allies Korea and Japan to cool down their boiling diplomatic row over Dokdo yesterday.

U.S. Secretary of State Hillary Clinton told reporters yesterday that she addressed the issue when she met with leaders of Korea and Japan in her separate meetings on the sidelines of the Asia-Pacific Economic Cooperation summit in Russia. 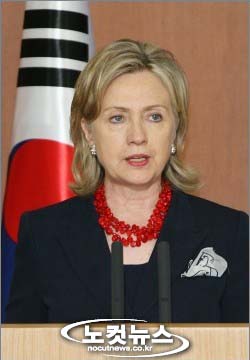 “I raised these issues with both of them, urging that their interests really lie in making sure that they lower the temperature and work together, in a concerted way, to have a calm and restrained approach,” Clinton was quoted as saying by the AFP. “I think that’s being heard.”

Leaders of the APEC member countries including President Lee Myung-bak and Japanese Prime Minister Yoshihiko Noda gathered in Vladivostok, Russia, for the annual summit and bilateral talks on the sidelines of the conference took place over the weekend.

Relations between Korea and Japan chilled after Lee repeatedly urged Japan to redress its long-standing grievances over its wartime crimes against Korea, including the sexual slavery. Tensions reached a new peak after Japan renewed its claim over Korea’s easternmost islets of Dokdo and Lee paid an unprecedented visit to the islets on Aug. 10.

On the sidelines of the APEC summit, Lee had several meetings with leaders of the United States, China, Russia and Japan. According to the Blue House, Lee and Clinton agreed yesterday that cooperation between Seoul, Washington and Tokyo is important to effectively deal with Pyongyang and its nuclear arms programs.

According to Park Jeong-ha, Lee’s spokesman, Clinton expressed hope for a better relationship between Seoul and Tokyo. Lee replied that he also sees the importance of cooperation between Seoul, Tokyo and Washington to resolve the nuclear crisis on the peninsula.

Until now, Washington kept its distance from the dispute between Seoul and Tokyo over Dokdo.

Lee also met briefly with Noda as the summit ended yesterday. According to the Blue House, the two leaders conversed for about five minutes after Noda approached Lee as the Korean president was leaving the conference room after the summit.

“The two leaders agreed to work together for a future-oriented relationship between the two countries,” Park said.