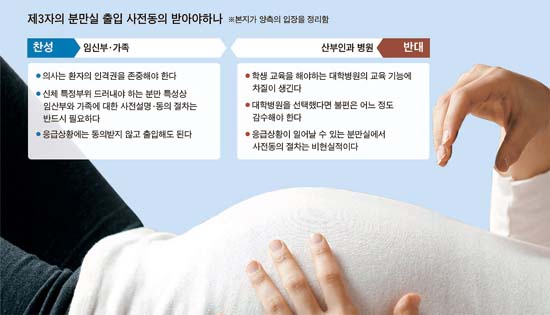 The Jeonju District Court on Tuesday ruled in favor of a 29-year-old mother who filed a damage suit against a hospital where she gave birth in April 2010, for allowing medical students to observe her delivery without her consent.

The court said the hospital should give the mother 3 million won ($2,645) as compensation.

In 2010, when the mother gave birth in Jeonju, North Jeolla, a group of medical students were also inside the delivery room to observe the delivery process as part of training. The mother, however, filed a damage suit, claiming psychological damage.

“When women give birth, they inevitably have to expose some of their important body parts and sometimes they are not able to control physiological phenomenon,” the court said in a statement.

“And they may be humiliated if others enter the delivery room, which can cause them psychological trauma.”

The court also stated that “mothers have the option whether or not to make public their delivery process and if hospitals want others aside from their medical attendants to be there, they should receive prior permission from mothers or their families.”

That mother isn’t alone in feeling violated while giving birth. Kim Hye-kyung, 32, who gave birth at a hospital in South Gyeongsang in September, last year, felt the same.

Immediately after she delivered a child, a nurse brought along two nursing major students and had them touch her lower stomach, saying “This is the womb. Can you feel it?”

Kim said it was extremely unpleasant.

Another 27-year-old mother who gave birth in 2009 at a large hospital in Seoul was also shocked when some six residents and medical students entered the delivery room and watched her give birth.

“I was surprised to see people come in but the doctor said he can do nothing about it,” she said.

There is controversy, however, over the Jeonju District Court’s recent ruling especially among doctors who wish to have residents or neophyte doctors look over the delivery process as part of training.

“Not just a doctor alone can help a mother give birth,” said Kyung Moon-bae, chairman of the Korea Intern Resident Association. “There should be other young doctors like residents and interns to help.

“Interns should be in the delivery room for the sake of training as well.”

Shin Jung-ho, secretary general of the Korean Society of Obstetrics and Gynecology, said, “If doctors are to receive prior permission from mothers before they give birth, hardly any mothers would allow others to come inside the delivery room. Medical students would then have to graduate without having seen the actual delivery process.”

The voice that supports mothers, however, is growing with the recent ruling.

“The court’s ruling reflects the social trend that mothers’ privacy should be absolutely protected,” said Lee Il-hak, professor at Yonsei University. “Private hospitals should at least seek permission from mothers and university hospitals should follow suit.”

Last year, Representative Yang Seung-ho of the Democratic United Party tried to come up with a bill that gives legal obligation to hospitals to receive mothers’ consent before allowing young doctors to attend the delivery operation.

But due to opposition from the medical circle, the plan was called off.

Mothers are asked permission in other developed countries like the United States and Japan.

“In the U.S., hospitals have been asking permission from mothers to have others observe the delivery process since the 1970s,” said Kim Joo-kyung, an official from the National Assembly Research Service.