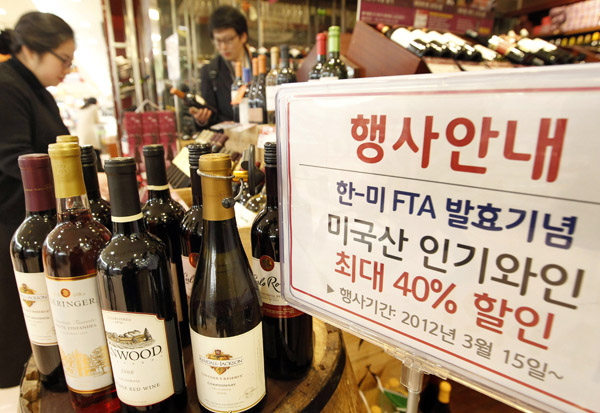 
The domestic wine market is becoming diversified as a result of the Korea-U.S. and Korea-EU free trade agreements, said a wine marketing company.

While domestic wine consumption has actually slowed amid the deepening economic slowdown, wine imports from both the United States and European Union surged after the FTAs went into effect, said the Korea Imported Liquor Wholesalers’ Association (Kilwa) yesterday.

According to a domestic wine market analysis by Kilwa, U.S. wine imports were $8.63 million between January and July, up 19.4 percent from the same period last year. The FTA went into effect in March. In terms of quantity, U.S. wines rose 9.6 percent during the same period.

Imports of Spanish wines and German wines during the January-July period shot up: 19.7 percent for Spain and 19.9 percent for Germany.

The Korea-EU FTA went into effect in July 2011. In terms of quantities, German wines saw a 28.9 percent increase.

In the same period, sales of Italian wine increased 4 percent from a year earlier, while those of French wines rose by 9.8 percent to $23.8 million.

“French wine imports are divided into top-class products and popular low- and middle-priced products,” said Shin Sung-ho, marketing director at Nara Cellar, wine marketing company. “While demand for the high-end wines remained the same, that for the low- and middle-priced wines increased as the import sources have been diversified due to the FTA.”

Meanwhile, sales of Chilean wines faltered this year, which benefited from elimination of tariffs since 2004, after facing more price competition from the European and American imports.

Imports of Chilean wines dropped 3.5 percent in dollar terms and 0.5 percent in quantity during the January-July period from a year earlier.

The market share of Chilean wines decreased to 21.7 percent from 24.1 percent, and of Australian wines from 6.7 percent to 6.4 percent.

Imports of Greek wines tripled, while those from Portuguese and South African wines increased by 2.2 percent and 2 percent, although their market shares are not yet insignificant.

“The domestic wine market is becoming increasingly diversified as the wines from the U.S. and the EU are now 10 percent cheaper and the number of consumers looking for new tastes are steadily increasing,” said Shin from Nara Cellar.