Lee Joon’s mother treats him to a condom

Lee Joon’s mother treats him to a condom 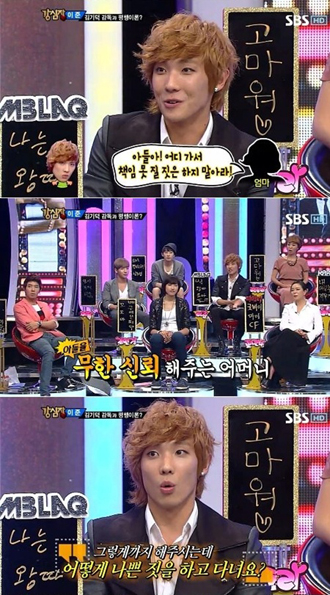 MBlaq’s Lee Joon generated much buzz while on SBS’s “Mighty Heart,” when he revealed that his mother gave him a condom when he enrolled in university.

“After becoming a college student my mom said to me, ‘You have to become a responsible man,’ and handed me a condom.”

Lee said that with encouragement like that, he couldn’t dare step out of line even if he wanted to.

When asked by the host Shin Dong-yup if he had used his enrollment present Lee stammered before answering, “It’s in my room still.”

Other contestants and the audience laughed as Shin quipped, “You should look at it during times of hardship and remember how good your mother has been to you.”

Perhaps, Lee’s mock spouse actress Oh Yeon-seo will have something to say on the matter.

The two were paired up for the hit MBC show “We Got Married” just recently.