Gun-shy investors turn to a safer kind of ELS

Gun-shy investors turn to a safer kind of ELS 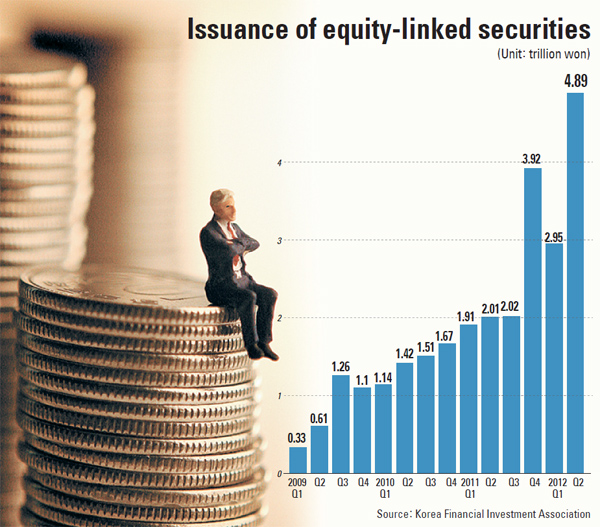 To cope with the era of low interest rates, more investors are giving regular savings accounts the cold shoulder and switching their attention to safe havens in hopes of reaping higher returns.

ELS were introduced to the local market in 2003 as derivatives that invest in single stocks or bonds, a group of stocks or an equity-based index.

There are two types of ELS products: one that guarantees principal payments and another one that doesn’t but gives higher yields.

“The return on ELS products depends on the movements of the underlying equities that are linked to the security,” said Choi Chang-gyu, an analyst at Woori Investment & Securities.

“But the data shows that people who are unsatisfied with low interest rates from savings accounts prefer to buy ELS products that guarantee the principal as they want to avoid the risk of losing their money in the event of the Kospi plunging.”

Investors’ growing demand for safe havens has also led to a jump in the number of principal-protected guaranteed derivatives-linked securities (DLS) issued, with these standing at 4.23 trillion won in the second quarter, up from 2.1 trillion won a year ago.

The returns on DLS are linked to fluctuations in interest rates, currency, real assets and credit risks.

Samsung Securities believes that demand for principal-protected ELS will continue to grow as older workers prepare for life after retirement.

Samsung’s retirement research institute surveyed 15,000 customers who consulted local brokerages to discuss their retirement plans from January to August and found that respondents believed they need to earn returns of at least 6.44 percent a year to live amid rising inflation.

Each of the respondents had assets worth 630 million won on average, and 59 percent were aged 40 to 50, it said.

“The annual interest rate on most deposits offered by local banks is below four percent,” said Kim Jin-young, head of the institute.

“Although the survey said they wanted 6.44 percent, in reality there is no safe financial product that can give those planning to retire more than 5 percent interest a year. That’s why ELS-related products and Brazilian bonds are so popular now.”

Investors’ preference for safe havens resurfaced on Tuesday when the government issued 30-year Treasuries for the first time, with the interest rate on them closing at 3.02 percent yesterday as buyers snapped them up.

It closed 0.04 percentage point lower than the rate for 20-year Treasuries.