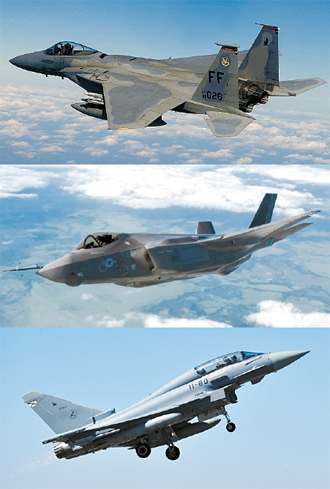 The countdown has begun for Korea’s largest-ever procurement project: the purchase of its next-generation fighter jets.

The government will spend 8.3 trillion won ($7.4 billion) to buy 60 advanced combat fighters to defend the country’s airspace for the next three decades.

The time line for the project was criticized as being too hasty, and the major political parties and experts pressured the government to delay the selection, but the Defense Acquisition Program Administration, the country’s arms procurement agency, is sticking with its schedule for now. The final decision under the current plan is to be made in late October.

The deliveries of the jets will go through 2016.

Fierce competition is ongoing among bidders hoping to win the Korean contract. The contenders are the F-15 Silent Eagle by Boeing, the F-35 Lightning II by Lockheed Martin and the Eurofighter Typhoon by the European Aeronautic Defence and Space Company (EADS).

An official from the Ministry of National Defense confirmed that the three bidders are engaged in fierce competition. Top executives of the three firms attended an international conference hosted by Yonsei University’s Institute of East and West Studies on Friday and promoted their aircraft.

Lobbyists and promotion agencies hired by the three firms were also extremely busy.

Linda Kim, a Korean-American arms dealer famous for having secured the multimillion-dollar Baekdu Project to introduce reconnaissance planes capable of electronic eavesdropping in 1996 for the Texas-based E-Systems Inc., worked for one of the bidders until the first half of this year, an industry source said.

The ambassadors of the plane manufacturers’ home countries are also stepping up persuasion efforts. U.S. Ambassador to Korea Sung Kim is most busy because two American companies - Lockheed Martin and Boeing - are trying to win the contract.

A source said Kim met with Defense Minister Kim Kwan-jin several times and sought cooperation by stressing the importance of the Korea-U.S. military alliance. Winning the contract to sell 60 fighter jets will create about 120,000 jobs and would boost the re-election campaign of U.S. President Barack Obama, so Kim is working hard to win it, the source said.

Ambassadors of France, Germany, the United Kingdom, Spain and Italy, the countries invested in EADS, are also working aggressively to promote its aircraft, other sources said.

Neighbors of Korea are paying attention to the competition. “Japan owns F-22s,” said an industry source. “And it is paying attention to whether Korea will buy the Eurofighter or not because it has a larger operational range and better strike capability.” The source also said China is collecting intelligence because the new fighter jets are likely to be deployed to the western coast of the Korean Peninsula.