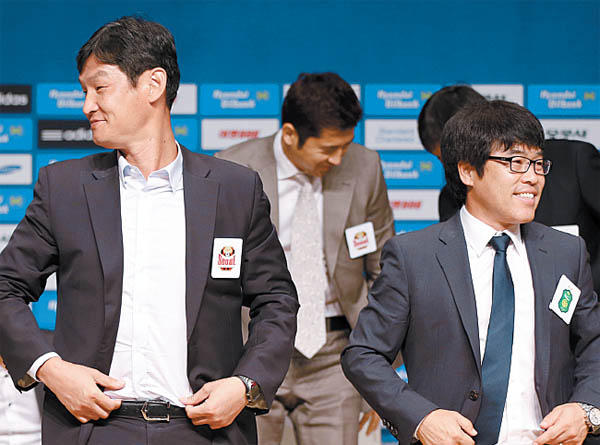 FC Seoul coach Choi Yong-soo, left, and Jeonbuk Motors coach Lee Heung-sil, right, at a joint press conference for the eight top-ranked K-League teams in Seoul yesterday. The two top clubs will vie for the league title during the second half of the season that starts on Saturday. [YONHAP]


FC Seoul and the Jeonbuk Motors, the No. 1 and No. 2 teams in the K-League, respectively, are readying for the final 14-game stretch of the season that kicks off this Saturday under the new split system.

Unlike previous years, when the first and second parts of the season had an equal number of matches, teams are set for a 14-match stretch that pairs the best with the best and the worst with the worst.

The split system pits the eight top-ranked teams from the 30-match first part of the season against each other in Group A, with one home match and one away match between each of the teams. The bottom eight teams are fighting to stave off relegation.

FC Seoul finished first through 30 matches with 64 points, and will seek to dethrone Jeonbuk to recapture the league title. The Motors are five points behind FC Seoul. The Suwon Bluewings and Ulsan Tigers are both at 53 points, although Suwon is leading Ulsan in goals for.

Seoul enters the second half with confidence, having not lost a single game to Jeonbuk in two years. During two matches against the defending champion this season, Seoul won one and drew the other.

Jeonbuk is coming off a sluggish performance last month. The team, which sprang to the top of the league in late June, lost the top position to Seoul with one win, three losses and two draws in six matches last month.

But Seoul’s predominance carries less significance if the Bluewings are thrown into the equation. The top three teams are in a complex food chain.

Jeonbuk has not lost in the last 10 matches against Suwon. It beat Suwon in six of the last 10 games since September 2008, including two this season, both 3-0 wins, while drawing the other four games.

But Suwon has had the upper hand over the league-leading FC Seoul, with six straight victories against the cross-city rival. It won the two matches against Seoul this season 2-0.

“We have tried every possible way to beat Suwon, but it all ended up as a loss,” FC Seoul coach Choi Yong-soo told a joint press conference for the Group A teams yesterday. He said that the team will be focused on beating Suwon to keep the lead in the second half of the season.

Lee Heung-sil, coach of the Jeonbuk Motors who filled the void left by coach Choi Kang-hee, now the national team coach, hit back and said that Seoul is not a formidable team to beat.

“Jeonbuk has had many come-from-behind wins .?.?. we will do the same in the league standings and win the league.”

Suwon coach Yoon Sung-hyo set sights on winning the league and said his club will focus more on breaking the jinx against Jeonbuk. Ulsan Tigers coach Kim Ho-gon said that the three top teams have problems in defense and Ulsan will bid to beat them all through a formidable attack.

The four top teams will also vie for berths to the Asian Football Confederation Champions League, to be given to the three highest-ranked K-League teams at the end of the season.

Both Seoul and Jeonbuk will have their second half openers on Sunday, against sixth place Busan I’Park and seventh place Jeju United, respectively. Suwon and Ulsan will open the second half tomorrow, against the fifth-place Pohang Steelers and eighth-place Gyeongnam FC, respectively.

Under the split system, the eight lower-ranked teams, paired in Group B, will also launch their second-half campaign on Saturday to avoid one-team relegation to the second division at the end of the season.

The relegation was originally for two teams, but on Tuesday, the K-League decided to demote the military-affiliated Sangju Sangmu Phoenix for the next season regardless of its results for failing to meet international club qualifications. Phoenix general manager Lee Jae-cheol held a press conference yesterday and demanded that the league backtrack the decision, but he said the team was yet to follow through with its threat to boycott second-half matches.