Korean Air is expected to post a record quarterly operating profit in Q3, but concerns are mounting about potential flight disruptions and other performance speed bumps as the company may soon face a strike by its pilots’ union.

However, industry analysts expect the quarter ending in September will see the airline beat its previous best performance of the same period in 2010, when it posted an operating profit of 358.1 billion won.

Some local securities firms are even predicting that the affiliate of Hanjin Group might surpass 400 billion won. Hyundai Securities forecasts a figure of 405.6 billion won, while Shinhan Investment is betting on 429 billion won.

The analysts said that stable oil prices, coupled with the airline posting a high passenger load factor (PLF) in its international routes over the recently ended summer vacation season, will translate as riches in Q3.

Over half of its sales reportedly come from international passenger flights, with oil making up around one-third of its overall operating costs.

“According to the airline, it carried 1.3 million passengers on international flights in August, its largest monthly figure to date,” said Yang Ji-hwan, an analyst at Daishin Securities, adding that it’s air cargo business is recovering.

Korean Air’s PLF, or occupancy rate, on international routes is also expected to beat its record of 83 percent set in July, no mean feat considering it has upgraded some of its fleet to jumbo-sized aircraft like the A380.

“The numbers for August have not been revealed, but the PLF is expected to pass July’s figure by around 2 percentage points,” said Yang. 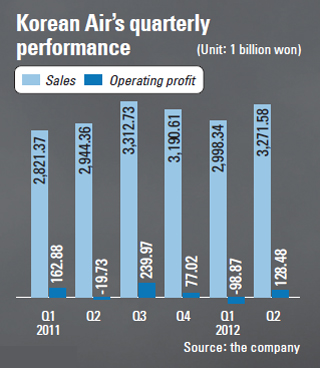 However, life is no bed of roses for the airline as it faces the prospect of a strike by its pilots’ union.

The flight crew union of Korean Air Lines (KAL) voted on Sept. 6 to stage a walkout after protracted negotiations with management to shorten working hours fell apart. Some 74 percent of those who participated in the ballot showed themselves in favor of striking.

This is the first time in seven years the union has adopted such a resolution, but it has not yet released details pertaining to the timing or duration of the strike. The talks have been going on for the last four years.

A tentative agreement was reached late last month, before members voted it down on Aug. 26. The union accused the management of contacting each pilot individually to sign contracts in a bid to bypass the prickly negotiations.

“We have been negotiating for four years, so the company is in a hurry to see a conclusion,” an official from Korean Air said. “We will try our best to prevent disruptions to our flight operations.”

Meanwhile, the airline suffered another setback after its attempt to buy a stake in Korean Aerospace Industries (KAI) failed, putting its plans to expand its aerospace business in jeopardy. The airline submitted a preliminary bid to buy the 41.75 percent stake in KAI for around 1.4 trillion won, but as it was the sole bidder the deal could not be reached because the rules state that there must be at least two competing bidders.

If the government-supported deal fails to find multiple bidders on two occasions, the airline would be allowed by law to seek a private contract. However, Chin Young-wook, head of Korea Finance Corporation, which is overseeing the sale, said last week that it will not pursue a negotiated contract to sell KAI, cutting down the chances of Korean Air acquiring the aircraft maker.

Another sore point is that the airline’s image has taken a hit after a civic group accused Emily Cho, one of its executives and the youngest daughter of Hanjin Group Chairman Cho Yang-ho, of corporate greed for running a coffee shop at Inha University Hospital. Korean Air is owned by Hanjin.