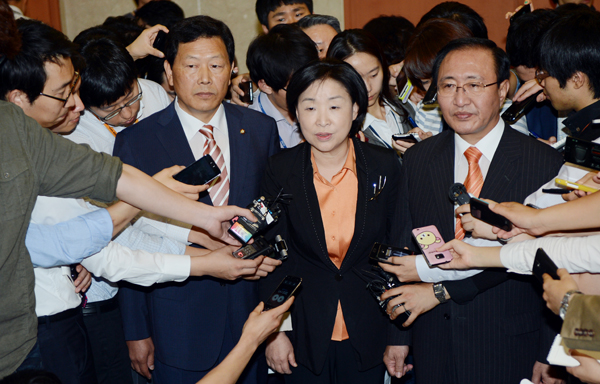 Lawmakers (from left to right) Kang Dong-won, Sim Sang-jeong and Roh Hoe-chan hold a press conference yesterday at the National Assembly to announce their defection from the minor liberal Unified Progressive Party. [NEWSIS]


Three lawmakers yesterday defected from the opposition Unified Progressive Party along with other members protesting the dominance of the pro-North Korea largest faction, wrapping up a mass defection and an effective split of the party.

The three outgoing lawmakers - Sim Sang-jeong, Roh Hoe-chan, and Kang Dong-won - had geographic seats. They said they will join four other former UPP lawmakers who have recently defected to create a new liberal party. 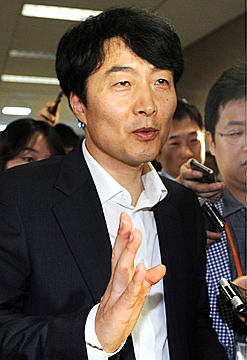 “We apologize for failing to develop the UPP as a good political party,” Sim said. “We will make bold reforms of the old-fashioned customs carried out in the name of the liberals and make a shift into a new liberal party.”

Sim told reporters that they would convene a large-scale, nationwide conference with UPP defectors and discuss plans on forming a new party. Roughly 300 or 400 people are expected to attend, she said.

Sim said that the Korean Confederation of Trade Unions, a main union association that has said it will withdraw its support for the UPP, is discussing whether to join the new party.

Rhyu Si-min, an icon of liberalism and a former co-chair of the UPP with Sim, also left the party. Rhyu was former chairman of the People’s Participation Party before he joined the UPP. Many former PPP members have defected from the UPP.

Sim said that the defectors completely broke away from the largest faction of the party, led by former student activists who are pro-North Korea and anti-U.S., and won’t have any further dialogue with them.

Because of the defections, the nation’s third-largest party has lost seven parliamentary seats. It now has only six lawmakers. The UPP’s largest faction has filed a lawsuit against four lawmakers, who volunteered to be expelled from the party last weekend and kept their seats as independents, in order to grab their seats from them.

Lee Sang-kyu, one of the six remaining lawmakers and a core member of the hard-line faction, said there would be no further defectors.

“As of now, roughly 19,000 members have defected from the party since May, and we have currently 121,847 members with about 45,000 dues-paying members. From today, there could be additional defectors, but not many.”

Formed in December 2011, the nine-month-old UPP aimed to be a party for workers and minorities and strived for integration of liberals with different political ideologies.

The largest faction members, who were the pro-North student activists, denied the allegation raised by the party’s internal probe team that it rigged a March primary to choose proportional representatives, saying it was being attacked by other factions.