MDs protest policies as bad for quality of care

MDs protest policies as bad for quality of care 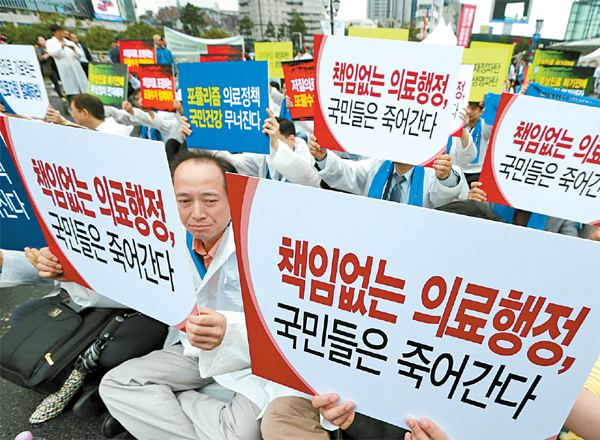 Hundreds of doctors clad in plastic raincoats stage a rally in front of Seoul Station Plaza yesterday for the first time in five years to protest against medical policies. [YONHAP]


Hundreds of doctors set down their scalpels and stethoscopes and rallied in front of Seoul Station Plaza yesterday for the first time in five years to protest against medical policies.

Despite the drizzling rain, members of the Korean Medical Association clad in plastic raincoats instead of their white coats staged the rally yesterday afternoon in order to address various medical laws that are “impediments to the health care of citizens” and addressed both doctors’ and patients’ rights.

“The government should guarantee the best treatment for patients!” and “With irresponsible medical policies, the people are dying!” chanted the protesters as they held up signs.

Ongoing tension between the doctor’s association and the government escalated back in June when the KMA threatened to stage a strike in protest of the government’s new medical service pricing system based on diagnosis-related groups.

The KMA did not boycott surgery and eventually accepted the government’s move to enforce a fixed-rate system for seven medical treatments, including appendectomies and hernia operations.

While the Ministry of Health and Welfare said the new system will lower medical fees for patients because doctors will refrain from giving unnecessary treatments, the KMA countered that the diagnosis-related groups’ fixed-rate pricing will in fact lower the quality of treatment.

The doctors at the rally again denounced the diagnosis-related group based pricing system, stating that patients in fact are not paying less for treatment and called the fee system “deceiving” and accused it of “deteriorating treatment for patients.”

Other issues addressed included understaffed emergency rooms that lack specialists, flaws in the health insurance system and the controversial so-called “Dogani” law, named after the Korean film which addressed the real-life story of disabled students who were sexually harassed by teachers, that aims to protect the vulnerable from predators.

The law also stipulates that doctors can face 10 years of license suspension for inappropriate sexual contact with patients.

“It is frustrating for plastic surgeons, dermatologists and other doctors because we can’t touch our patients for fear that we will get accused of sexual molestation and face a suspension of our license,” vented one doctor.

At the end of the rally, the chairman and doctors smashed an ice sculpture to symbolize “breaking the unethical medical laws” and protestors took to the streets and marched 2 kilometers (1.2 miles), through Gwanghwamun to the Sejong Center for Performing Arts in central Seoul.

“As a young doctor I feel anger from the center of my heart that bad medical policies are causing discomfort for patients,” said Kyung Moon-bae, chairman of the Korea Intern Resident Association. “As a resident, I envisioned learning from great doctors and treating patients, but as I entered the hospital facing long hours, I could see the distance between that vision and reality.”

The KMA, established in 1908, has over 100,000 members, and the rally was streamed live online on the KMA’s Web site for the doctors who could not attend because of patient treatment as well as the general public.