Alliance of Imaginary Nations gets real on tours

Alliance of Imaginary Nations gets real on tours 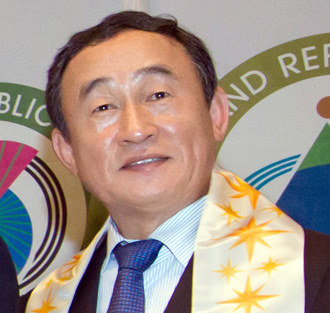 Kang Woo-hyon is the CEO of Nami Island Inc., a tourism company for the island of the same name located in Gangwon. When the company’s initial founder stepped down, Kang stepped in and began transforming the island from a dying recreation area buried in empty soju bottles to a popular tourism destination.

Kang came up with ways to turn the island’s trash into useful things. For example, soju bottles were pressed into tiles and were plastered to the walls of bathrooms and tourism information centers.

The island now welcomes approximately 2.3 million visitors every year and is known as the Naminara Republic after having declared its own “cultural independence.” Fake passport stamps are even issued for those who enter the island.

This concept has been adopted by other islands and tourist destinations. The Alliance of Imaginary Nations held a press conference in central Seoul on Monday in front of an audience of 300, including nine heads of local governments such as the county director of Cheongsong in North Gyeongsang and the head of southern Seoul’s Gangnam District Office.

“We are creating our own currency, flag, passport and even a national symbol,” Kang said, referring to the alliance system.

“This is the first time local governments have teamed up for the sole purpose of tourism. Private leading enterprises have also participated and government departments such as the Ministry of Culture, Sports and Tourism as well as the Korea Tourism Organization have revealed their interest in collaborating with us.”

The following are excerpts from an interview with the leader of the Alliance of Imaginary Nations.

Q. How did you bring together these nine local governments?

A. Both in name and reality, Nami Island is Korea’s number one tourist destination. Last year, more than 2.3 million people visited our island, and of that number, 420,000 were foreign tourists who arrived from 102 different countries. More than 70 local governments have come to the island to discover the reasons behind our success, and we decided to choose nine of them that showed relentless enthusiasm.

How are you going to develop the alliance?

I came up with names that matched each region’s distinct characteristics. For example, Yeoju is named the Republic of Sweet Potatoes. In Yanggu County, there is an artificial land that looks like the Korean Peninsula, so we called it Small Korea.

Is the alliance a joke?

A micronation is when a community declares its desire to become a sovereign state and already there are about 120 micronations in the world. Nami Island changed to the Naminara Republic in 2006. The Alliance of Imaginary Nations consists of an assembly of 10 districts that form an association of nations.