Duo spreads the word about K-fashion in NYC

Duo spreads the word about K-fashion in NYC 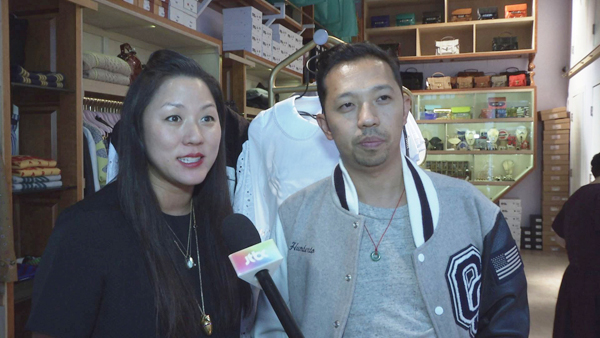 
NEW YORK - “It is the perfect time to introduce Korean fashion designers and brands to New York and the international fashion industry,” said 36-year-old Humberto Leon, co-founder of Opening Ceremony, a global designer shop regarded as a gateway for rookie designers in New York City.

Leon, who is of Chinese-American roots, established Opening Ceremony with Korean-American cofounder Carol Lim, a fellow student at the University of California, Berkeley. The two co-founders have grown the designer select shop into a fashion giant, with eight stores in Los Angeles, London and Tokyo.

Opening Ceremony proved its eye for style in 2007 when it displayed collections from designer Alexander Wang when he was still an unknown. Wang went on to become one of New York’s star designers.

Louis Vuitton designated the two co-founders as the creative directors of its Kenzo brand, headquartered in Paris. The name Opening Ceremony came as Lim and Leon were inspired by the Olympics’ opening ceremonies.

Having chosen designers from Hong Kong, Brazil, Germany, England, Sweden, Japan, France and Argentina, it has chosen Korea as the invited country this year.

Designer brands from 23 Korean star designers such as Jung Ku-ho, Ko Tae-yong, Jung Go-en and Kang Seung-hyun, who is currently working in New York as a model and a designer, will be on sale at the eight Opening Ceremony shops worldwide this fall.

The two forward-thinking founders met with JTBC, a general broadcasting company established by the JoongAng Ilbo, at the Ace Hotel in New York City to talk about Korea’s competitiveness in the fashion industry in New York.


Q. Why did you choose Korea and Korean designers this year?

A.This year is the 10th anniversary of Opening Ceremony, and we wanted to invite a very special country, said Carol Lim. I think Korea is one of the most vibrant and dynamic countries in Asia and there’s always something interesting going on there. We wanted to convey that energy to New York.

K-pop fever and Korean dramas are gaining enthusiastic responses not only in New York but around the world. It is the perfect time to introduce Korean fashion to the rest of the world. Music, drama and fashion are on the same page, said Humberto Leon.

What was it like when you introduced Korean designers before?

In short, it was a blast. Their novelty has been highly recognized as the creativity of Korean designers is remarkable. They all have their distinctive and unique colors of their own, and the New York fashion industry is thirsty for a fresh look, said Leon.

Korean designers are already endowed with an international flair. Korean students are also increasing each year at three major fashion schools in New York. Even among the designers we are bringing in this year, there are two graduates from Parsons Fashion School and there are also designers who have gained fame and success in Europe and Asia. They are yet unknown in New York, but through this opportunity, they will make their names here, said Lim.

What do you think about the recent boom of K-pop?

Korea reminds me of state-of-the-art technology, and when that image is combined with the culture, it gives me a good impression, said Lim.