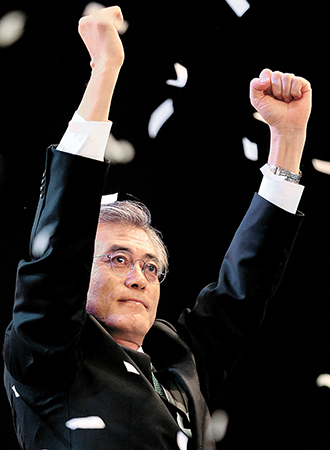 Moon Jae-in, former chief of staff for the late President Roh Moo-hyun, accepts his victory in the primary of the largest opposition party yesterday. [YONHAP]

Representative Moon Jae-in, former chief of staff for the late President Roh Moo-hyun, was elected yesterday as the presidential nominee of the Democratic United Party.

Moon, 59, who won the primary by a wide margin against three other contenders, promised to wrest power turnover from the current conservative-led Saenuri Party.

But whether Moon will actually run, or whether he may be forced to surrender his candidacy to software mogul-turned-academic

Ahn Cheol-soo, is totally unclear. Ahn is expected to announce his presidential bid this week, and the liberals want a single candidate to challenge the Saenuri Party’s Park Geun-hye.

After holding its final 13th round of voting from the capital region, the main opposition party announced that Moon won 347,183 votes (56.5 percent), while Sohn Hak-kyu, former DUP chairman, finished the race in a distant second with 136,205 votes (22.2 percent).

Yesterday’s result came after Moon secured wins in other regional primaries including the first one that kicked off on Jeju in late August. By Saturday, Moon had secured his 12th straight win.

“Where I stand today is based on a foundation built by [former Presidents] Kim Dae-jung and Roh Moo-hyun,” Moon said in his acceptance speech yesterday. “I will repay [them] by winning the December presidential election.”

Moon, a human rights lawyer-turned politician, served as the final chief of staff to late President Roh from 2007 to 2008 after serving in three positions as a senior presidential secretary in different departments.

Moon met Roh in 1982 when he was working as a human rights lawyer.

Moon emphasized the need for fairness and justice in government affairs.

“Fairness and justice will be the basis to state affairs,” Moon said. “Society should be reborn to become more transparent and cleaner by severely penalizing crimes committed by people in the privileged class and taking severe measures against power-related irregularities and corruption.”

Moon added that he will become a “healing president” that cures the pain of the neglected public and that he will establish a mid and long-term plan for universal welfare.

He also presented a new approach on North Korea.

“I will promote a South-North Summit in the first year of my presidency,” Moon said. “I will make sure to bring peace to the peninsula.”

Moon was born to a poor family in Geojae, South Gyeongsang, and he studied law at Kyunghee University.

He was arrested twice, in 1975 and 1980, for being in the forefront of student demonstrations opposing the dictatorship of then President Park Chung Hee, the late father of the ruling Saenuri Party’s presidential candidate Park Geun-hye, and his successor Chun Doo-hwan.

The primary race generated some controversy when the three other contenders challenged the fairness of the process, in particular the voting by mobile phone.

Although Moon is officially the DUP candidate, it remains to be seen if he will end up as the single liberal candidate with independent Ahn seeming to be preparing to enter the race.

The liberals want a single candidate to pit against the ruling Saenuri’s Park.

But Ahn refused to join any party or participate in any primary.

He says he stands for a new type of politics.

But if he and the DUP’s official candidate both run, they will undoubtedly split the liberal vote and give the election to Park.

An official close to Ahn told the JoongAng Ilbo yesterday that Ahn will announce the timing of a press conference as early as today.

Ahn indirectly expressed his intentions to run by visiting the May 18th National Cemetery in Gwangju on Friday to pay respects to former student activists.

National opinion polls put Moon behind both Park and Ahn, but he has been catching up with Ahn recently.

Park, former chairwoman of the ruling party, became the first woman to run for president for a major Korean political party after garnering 84 percent of the votes in her party’s primaries.

The Saenuri Party yesterday jeered at Moon’s victory in the DUP primary, saying that Moon is only a “half-nominee” who has not yet been named the sole liberal candidate.

“He [Moon] is only a half-nominee so we can only give him a half-congratulatory message,” said a close aide to Park. “Moon falls short of Park as a presidential candidate in terms of preparation, stability, and credibility.”