Getting inside the novelist and his gallery

Getting inside the novelist and his gallery 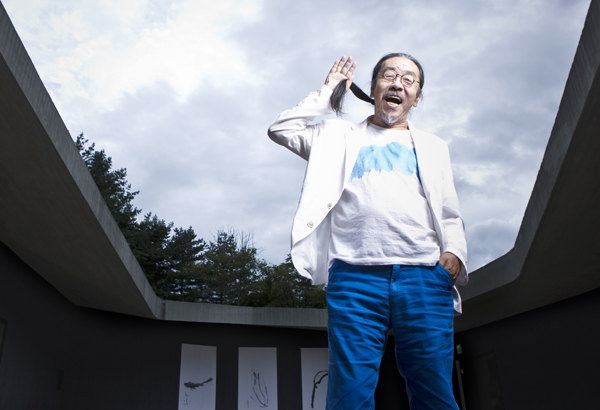 Novelist Lee Oi-soo says his tweets are the foundation for his literary pursuits. By Kwon Hyuk-jae


HWACHEON, Gangwon - Korean politicians running for the top office in December are busy showing what they’ve got to the voters.

But even with their packed schedules, there is one person they make sure they take the time to meet: novelist Lee Oi-soo.

Known mostly for his eccentric lifestyle and appearance as well as passion for the society and empathy toward the people, Lee has several best sellers and enjoys the nickname “Korean president in the realm of Twitter” for having a whopping 1.4 million followers.

Last month, the Lee Oi-soo Gallery opened in Hwacheon, Gangwon, near his home. It was seven years ago that he moved to the area and since then the place has emerged as something of a “Holy Land” for his followers.

Presidential hopefuls like Park Geun-hye of the ruling Saenuri Party and Moon Jae-in, Sohn Hak-gyu and Kim Doo-kwan of the opposition Democratic United Party have all visited Lee either at the gallery or his house in apparent attempts to garner support.

And when you go to the Lee Oi-soo Gallery, you see the many facets of Lee. This may seem obvious, but it is the only gallery in Korea dedicated to a living writer.

At the gallery are books by and about Lee, as well as his manuscripts, pictures he’s drawn and computers he’s used to write with. Lee has also composed the music that plays here.

The 66-year-old, who was born to an impoverished family, entered the world of literature in 1972, when one of his short novels received an award from a newspaper. But like most writers of the time, he lived in abject poverty. He remembers how he once brought a dead dog into his room and slept with the carcass to fight the extreme cold.

Despite his yeti-caveman appearance, Lee is dexterous in IT. He started using a computer in 1997 as a result of failing eyesight and chronic back pain from years of writing by hand. Today, he puts up five to ten tweets a day.

The JoongAng Ilbo sat down with Lee last month to see just what attracts people to this man and what he’s got to say to the world.

When the reporter arrived, Lee was greeting two college students from Gwangju. He explained the exhibits, gave them his autograph and posed for a photo with them.

Q. How many people visit the gallery? Do you greet visitors personally every day?

A. In the summer, about 200 people came every day. It seemed many of those coming to Gangwon to spend their summer vacation have stopped by on the way. But now that the peak summer vacation season is over, only 50 to 60 people come each day.

For now, I guess I must greet visitors myself. It is kind of a pain. I am a nocturnal person - going to bed at six in the morning and waking up at eleven at night. I have lived like that for 30 years. But now I come to the gallery at 10 a.m. and stay until 6 p.m.

But I have to admit that it is quite an encouraging experience. Many people who come here say to me that they’ve wanted to meet me in person. Also, I can answer people’s questions about my works and gratify their curiosity. I guess that is an upside to this place being a gallery dedicated to a living person, not a dead person.


I wonder what you talked about with the presidential hopefuls that came to see you. Why do you think they visit you in the first place? Also, many people would like to know what criteria you would use to choose a candidate.

Regardless of which party they belong to, they all say that they want the world to be clearer and Korea to be better off. I felt that it is their sincere wish. I also took the liberty of sharing my complaints. I pointed out how few of the presidential hopefuls have included in their pledges anything related to culture and arts, and that it is high time that they do.

They all showed strong conviction on changing the current education environment. They called for education that put emphasis on the basics. For instance, if the use of the Internet and smartphones cause social problems, people shouldn’t ban their usage all together but educate people how to use those devices well.

I guess as to why they visit me, they want to find out what it is that makes me appeal to some 1.4 million Twitter users and adopt it in their campaigns.

As for me, the most important thing in choosing a candidate is their love for the people. I think that is more important than their political capacity. I look at if they have been generous and caring for others in the past, and also if they plan to put in place systems to continue such works. Once I choose which candidate to support, I’ll make that clear through Twitter. 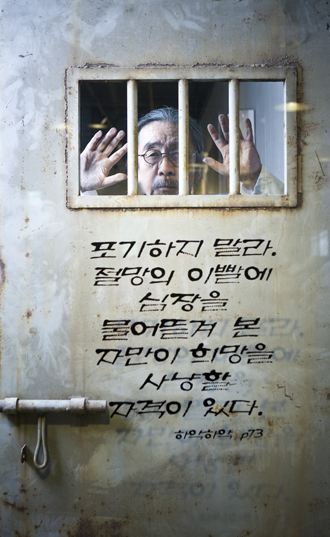 The writer stands behind a prison door in the Lee Oi-soo Gallery. He set up the door 20 years ago to work behind because he “needed an environment where he could concentrate.” The words on the door, that are written in the self-designed font, are an excerpt from one of his novels: “Don’t give up. Only he whose heart has been ripped apart by fangs of despair is qualified to hunt for hope. - Ha-ak Ha-ak Page 73.”

You are so popular among the younger generation. What’s your take on them?


I think young people nowadays are unstable. They are dispirited, unhappy and lost. The question I get the most is: “I have no interest, expertise or ambition. What should I do?” Asking what to do with their lives, what a depressing life.

I tell them it is perfectly natural that you don’t know what to do in your 20s and that you don’t experience success in your 20s. The 20s is when you should explore, test your capacities. I tell them it is perfectly normal that nothing is set in stone for about three to five years after you graduate [high school or university] and that it is a blessing. The problem lies in thinking there is one answer.

When I was young, I was also full of uncertainties and a sense of inferiority. In my youth, I even tried to kill myself. I felt like I was good at nothing. I would never want to go back to my 20s. But I said to myself “let’s just be good at one thing.” And that’s how I came this far. The only thing I was good at was that I was more tolerant to hunger and insomnia.

It is my wish that I could give the younger generation some degree of help and when they communicate with me that they would relieve stress and have fun.


How many messages do you get on Twitter every day and how do you think that helps your writing career?

I receive more than 1,000 messages an hour. I read most of them and reply to most of them. I guess that is why people like me.

But more difficult than replying to other people’s messages is putting up my own messages. It takes a long time. And when the message includes literary expressions, I take up well over an hour to complete it. Sometimes I revise it more than seven times. That is why some followers would denounce me for posting what appear to be the same tweets over and over again.

But for me, Twitter is a place where I do foundational work for my literary works. It is where I brainstorm, get my inspiration, acquire information and communicate.

What aspects of your life are you proud of?

Usually, when people get old, they compromise. But even if I went hungry for days, I never compromised. I am the owner of my life and I always follow what my heart says.

In fact, I think I lived quite a fabulous life. I had to beg for food and was hungry until I was in my 40s. But I never gave in to temptations and was free from them.

And for some time now, people have recognized me and acknowledged me. There are many places that want me, and if I go I get money. Isn’t that quite a life?

Monk Junggwang’s tombstone reads: “I shouldn’t have come.” But I’m the opposite. I’d like my tombstone to read: “I lived quite a life.”

Lastly, what book are you working on at the moment?

It’s about a man who walks on the water. I bought a yacht for research. I have to go in to the center of the water and get a good visual idea of the surface of the water. A yacht association heard that there is a strange guy using a yacht for an odd purpose. It got me a yacht priced over 100 million won ($88,573). The setting of the book is the area between Hwacheon River and Chuncheon River, so I have traveled between the areas three times now. But I need more research.