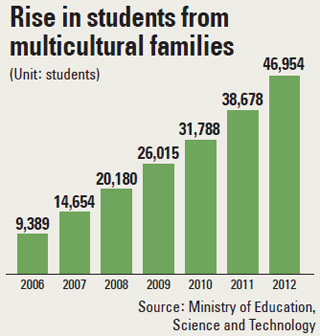 The number of students from multicultural families in Korea rose more than 20 percent on-year in 2012 to make up 0.7 percent of the country’s total school children, data showed yesterday.

According to the data compiled by the Ministry of Education, Science and Technology, the number of multicultural students who attend primary or secondary schools in Korea reached 46,954 in 2012. It is nearly five times larger than 9,389 in 2006, when the ministry began compiling the data.

The number of multicultural families in Korea has been on the rise, reaching some 250,000 households nationwide last year, due largely to an increasing number of Korean men marrying foreign wives and a steady influx of migrant workers settling here to take up jobs.

If the current trend continues, multicultural students will make up more than 1 percent of the country’s total primary and secondary school students by 2014, according to the data.

Among those students attending Korean schools, 40,040 students, or 85.3 percent, were born here through international marriage, followed by 9.1 percent who come to the country with a foreign parent, and 5.6 percent born to foreign couples residing here, the data showed.

As for the nationality of the students’ parents, China topped the list with 33.8 percent, followed by Japan with 27.5 percent, the Philippines with 16.1 percent and Vietnam with 7.3 percent, according to the data.

In response to the growing number of students from multicultural families, the Korean government devised diverse measures to help them better adapt to school, including operating “preliminary schools” across the country to teach them the Korean language and culture for about six months before they start regular schooling, and adding the “Korean as a Second Language” subject to the regular curriculum in schools, which have a certain rate of foreign students.