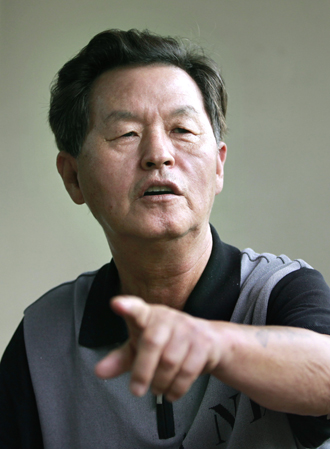 A group of North Korean defectors who were writers in the communist country have joined an international association of poets, playwrights, essayists, editors and novelists called PEN International as part of efforts to raise public awareness of life under the reclusive regime.

The 78th forum of PEN International took place in Gyeongju, North Gyeongsang, between Sept. 11 and 15 with a series of writers gathering, including French author Jean-Marie Gustave Le Clezio and Nigerian playwright Wole Soyinka.

At a general meeting on Friday, all representatives of 38 regional chapters of the association unanimously supported a bill accepting the North Korean writers as members of their association.

Jang Hae-sung, the chairman of the group in the South, said that through joining the international society of writers, they will step up efforts to raise awareness of human rights violations in the North and the deprived freedom of expression in the reclusive country.

The 67-year-old North Korean defector was a former North Korean state media reporter and a drama writer. Graduating from the philosophy department of the regime’s elite Kim Il Sung University, Jang defected to the South in 1996 alone.

His wife died of cancer there after his defection, and he brought his three daughters to the South later. Jang worked for the Institute for National Security Strategy under the National Intelligence Service as a senior researcher until 2006, when he retired. He’s currently living in northeastern Seoul with a South Korean woman.

At the residential apartment, provided by the South Korean government, Jang sat down with a reporter from the Korea JoongAng Daily.

Jang said that seeing the membership registration as an opportunity, the pieces by North Korean writers will now spread all around the world and will support North Korean defectors who hope to become writers in the South.

Q. Please elaborate on your group and why you applied for membership at PEN International.

A. We launched this group in 2004 to share ideas on writing stories in the South along with some 20 defectors who were authors or poets. Basically, North Korean literature praises the greatness of Kim’s family and how the North Korean people have dedicated their lives to the realization of the socialist revolution. We just wanted to see our role as revealing the reality of the regime repressing freedom of expression.

Do you know of any North Korean defectors who made their debut as writers in the South?

Kim Song-min, president of Free North Korea Radio, is the first North Korean debut author in the South, with his 12 poems about the North Korean people’s struggle.

Jang Jin-sung, the director of New Focus, is also a famous defector-turned-author, with his renowned poem “I’m Selling my Daughter for Only 100 Won” which depicts the brutal dictatorship in North Korea. This April, Kim Yu-kyong, a female writer, also made her debut with the novel “Love Song of the Youth,” which describes the grueling journey of North Korean defectors.

When did you start your career as a KCTV reporter and what was it like to work there?

After I graduated from university in 1976, I started my career at KCTV as a political reporter. There were many departments under the political bureau of KCTV, and I worked for the Revolution No. 1 Department, which idealizes the legacy of founding leader Kim Il Sung. The Revolution No. 2 department is in charge of praising the works of Kim Jong-il.

When I was working, KCTV had roughly 2,400 employees and the Korean Central News Agency had around 1,800 workers.

As a writer of drama series, what did you mostly focus on?

For instance, I wrote a television drama series called “Chonbok & Mangil,” which was very popular among the North Korean people. It featured two main characters, Chonbok and Mangil, with opposite personalities, and how they are mingling with other people at a construction site.

It sought to deliver a message about how people cooperate with each other under the rule of Kim Il Sung and Kim Jong-il. I also made a documentary film that centered on the life of Kim Il Sung as an anti-Japan activist.

How did you feel when you first started reading South Korean literature?

It is entirely different. North Korean literature developed from socialist literature to ideological literature, and North Korean writers are deprived of freedom of expression. In the North, what authorities hate the most is pure literature, which is free from any political ideology and pressure. But when I came to the South, most of the literature was pure.

But it’s actually not that difficult to change our writing skills for pure literature. I do sometimes find that some North Korean defector-turned-writers focus on describing trivial things, such as how cruel Chinese brokers are, and not criticizing the political system of North Korea.

What did you mainly cover as a political reporter?

For instance, Kim Il Sung made his field guidance trips to Chongsan-ri, in South Pyongan Province, about 50 times. After his visits, I went there later and interviewed local residents about how much their livelihood improved after his visits and what their impressions of the leader were.

After the interview, I wrote scripts for anchors who narrated them. A camera operator or photographer shot designated scenes of people after my scripts were authorized by three high-ranking officials.

When the former leader Kim Jong-il died in December 2011, the state television showed many people wailing and crying at the funeral. Although you weren’t there, how did you feel when you saw the scenes broadcast by the KCTV?

As a professional reporter of KCTV, I felt the scene was a bit strange. When founding leader Kim Il Sung died in 1994, we just shot people randomly running through the streets, because many people indeed cried. In fact, compared with Kim Jong-il, his father was really popular and respected.

However, in the latest funeral for his son, I found that the producer selected certain people and soldiers and shot them only, while some people were just looking around at the scene without crying. So I thought those crying girls who appeared on TV were all manipulated.

Why did you defect from the regime?

I let my tongue slip. Working for the department praising Kim Il Sung, I began to be tipped off about many hidden reports and confidential information and delivered it to some of my friends.

I witnessed a string of my friends questioned by the state security agency about my loyalty to the regime. I noticed that something was going wrong and determined to defect to the South before I got jailed in the notorious political prison camps.

Can you elaborate on the security information you heard from North Korean officials?

I had known a former anti-Japan communist guerilla who worked for Kim Il Sung for many years, because his daughter was a schoolmate of mine.

One day, he tipped me off that everything about the birthplace of Kim Jong-il, which the regime always praised as the bloodline of Mount Beakdu, is a lie. He said that the son was born in Russia, when his father entered the Soviet Union army in 1940, and the army urged him to get married, under the customs of the Russian military.

So he got married with Kim Jong-suk, who was also a communist activist, and Jong-il was born within Russia.

However, in the 1980s, when North Korea was preparing to mark the 70th anniversary of the Kim Il Sung’s birth, the founding leader called on former guerillas to “find the birthplace of Kim Jong-il” at Mount Baekdu.

It was a silly request, because all of the activists knew that he was born in Russia. But they couldn’t resist the order of the founding leader. So they just set up the place, which the regime currently praises as the birthplace of their great general.