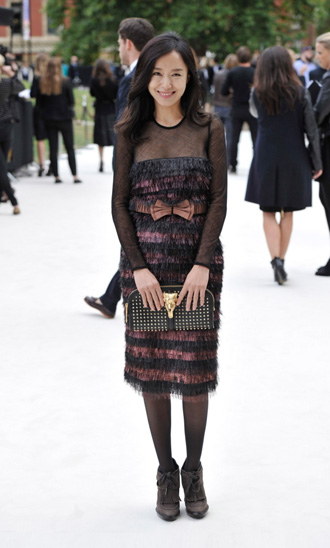 Actress Jeon Do-yun took some time off to take in Burberry’s latest collection, which was the finale event during London Fashion Week.

The show took place on Monday in Hyde Park and showcased the 2013 spring/summer collection.

Ever the fashionista, Jeon wore a black and pink evening dress from this year’s collection. Paparazzi went wild, trying to snap pictures of the Hallyu star.

According to Jeon’s agency, the 39-year-old was invited by Christopher Bailey, Burberry’s chief creative officer.

Bailey apparently was touched that she decided to come and sent her a handwritten thank-you note.

Jeon made her debut in 1990 in a TV commercial.

In 2007 she won the Best Actress award at Cannes for her role in “Secret Sunshine.” “The Housemaid,” released in 2010, was also a favorite with film critics.