Two guys the cops should not have gotten angry

Two guys the cops should not have gotten angry 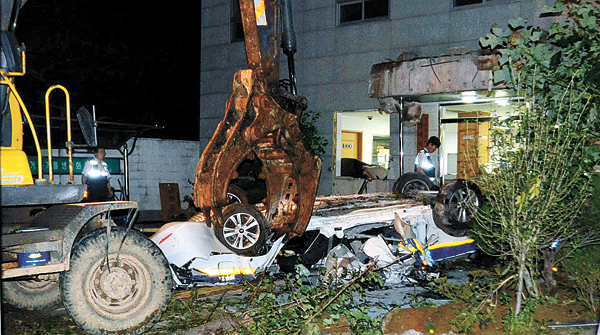 A construction worker surnamed Hwang smashes a police patrol car in front of the Sangdae Police Station with his junkyard crane in Jinju, South Gyeongsang, on Monday night. Hwang, disgruntled over a parking ticket, carried out a 40-minute attack on the station until he was shot in his left thigh by a policeman. Provided by South Gyeongsang Police Agency


Two Koreans who had minor brushes with the law decided they were mad as hell and weren’t going to take it anymore.

Tuesday on Yeonpyeong Island, which was shelled by North Korea on Nov. 23, 2010, a man surnamed Woo drove his Hyundai Galloper SUV through the front entrance of the Yeonpyeong Police Substation, damaging its front doors and facilities inside.

It turned out, Woo lost his driver’s license in May for driving under the influence and was fined 5 million won ($4,470).

Back in May, Woo’s wife had trouble maneuvering their car out of a parking lot and hit a wall. Woo took control and he also had trouble driving. A passerby reported the couple to the police, who decided the couple was drunk.

Both lost their licenses.

On Tuesday night, Woo visited the police substation and quarreled with an officer who had worked on Woo’s case.

After a few minutes of quarrelling, the suspect went to his car and smashed into the office, authorities said. Police said Woo wasn’t drunk.

An even more dramatic case occurred Monday night in Jinju, South Gyeongsang, when a 41-year-old construction worker surnamed Hwang drove a junkyard crane to the Sangdae Police Station and used it to smash a patrol car against a wall and demolish the front gate, windows and some nearby trees.

The 40-minute attack came to an end when a police officer fired three rounds at the suspect, one of which hit his left thigh.

When the police took a sobriety test two hours after the incident in a hospital, Hwang’s blood alcohol level was 0.099 percent, indicating he was intoxicated.

It turned out that Hwang went to the Jinju City Hall earlier in the day to protest a parking ticket, arguing that his car was singled out for a ticket and other cars got away with illegal parking.

He scuffled with officers there, and was sent to the Sangdae Police Station, where he was questioned for obstruction of justice. Hwang was released shortly after, the police said, and came back with the crane hours later.