Moon could use a history lesson

Moon could use a history lesson 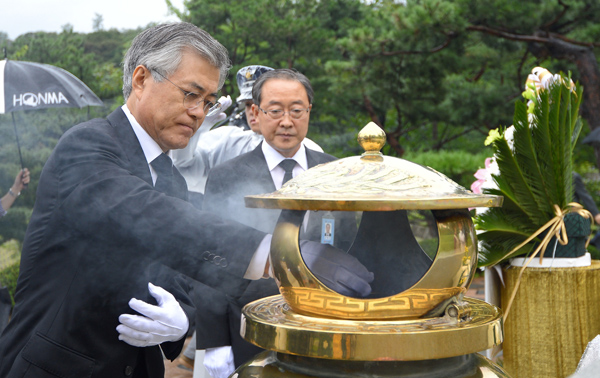 What incongruity for someone who vowed to be a melting pot. Hasn’t he praised his rival from the ruling Saenuri Party, Park Geun-hye, for visiting graves of former liberal presidents Kim Dae-jung and Roh Moo-hyun? Yet Moon Jae-in, freshly elected as the presidential candidate for the main opposition Democratic United Party, said he was skipping the tomb of Park’s father and former President Park Chung Hee and stopped just at the grave of President Kim Dae-jung as a kind of the early-stage ritual of presidential candidates paying respect to ancestors, leaders and patrons.

It was partly understandable because his visit was during primary race and necessary to woo voters in the Jeolla constituency, the political home of dissident-turned-president Kim.

But Moon, who was arrested for leading student protests against Park Chung Hee’s dictatorial rule, made it clear he wouldn’t bow his head to symbolic figures of the military and authoritarian regime. “There cannot be unity just because the victims have forgotten about the past. The Saenuri Party’s roots are with the military regime,” he said. He should have referred to the past relationship and connection among Kim Dae-jung, Roh Moo-hyun, Park Chung Hee and his daughter before rushing to judgment.

To defeat the conservative and ruling candidate, Kim Dae-jung joined hands with longtime enemy Kim Jong-pil, who with Park Chung Hee led the controversial Yushin program, or constitutional amendment to lengthen Park’s rule and his brutal oppression of dissidents like Kim. He also made Park Tae-joon, a military friend and accomplice in Park’s military coup, his prime minister. For four years and four months of Kim’s five-year term, his prime ministers were key figures of the military regimes - Kim Jong-pil, Park Tae-joon and Lee Han-dong, a bigwig from the Democratic Justice Party that was established by President Chun Doo Hwan, who was a general.

Kim Dae-jung thought highly of Park, who had even ordered him killed. “[Park] gave people confidence and the will to accomplish much at a time when a modernized and wealthier society seemed far-fetched. And he delivered the dream.” He even volunteered to take up the honorary chairman role of the Park Chung Hee Memorial Foundation. When Park Geun-hye visited him after his retirement and apologized to Kim “for the pain and damages” her father caused, Kim responded with a gracious thank you. President Roh also had good words for Park, saying his rival “had admirable conviction.” He even proposed Park of the opposition party as his unification minister. She was frequently asked to work in a mediating role in inter-Korean affairs and serve as special envoy to North Korea.

The two, however grew apart in mid-2004 after Park turned in a tough opposition leader. Roh and the ruling party picked on her past. Her involvement in a scholarship foundation set up by her farther resurfaced and a retrial in the case of Inhyukdang, or People’s Revolution Party, ended in an acquittal of the accused - mostly student activists against Park’s dictatorial rule - who were executed on charges of violating the anti-communist act. Roh said politics was at the crossroads of returning to the Yushin days or moving to the future. The Uri Party called Park “Yushin princess.”

A year later, the mood suddenly changed. In the fall, Roh proposed Park form a coalition government. He even offered major posts, including prime minister, to the Grand National Party.

It has been Kim Dae-jung who first embraced foes and President Roh who proposed a partnership with Park. Moon, as one of Roh’s senior secretaries and closet confidante, would at least know about Roh’s intentions. Yet Moon was enraged that “the political forces sprouting from the military coup and Yushin dictatorship are still parading and wielding power as the mainstream.”

Everyone knows Park is the daughter of Park Chung Hee. Yushin dictatorial rule ended 32 years ago. Why suddenly the cold shoulder after saying bygones should be left bygones? Why is Park Geun-hye a problem because she is the daughter of a dictator? Is it because a foe becomes a friend only when he or she serves one’s political purpose?

Park grew under her father’s legacy, so she should be partly responsible for her father’s governance. She could be criticized for lacking fair historical perspective as a state leader. But critics should be sincere. Their questioning is not credible if their questions change according to whom they question.

President Kim Dae-jung in 2005 advised politicians to “show understanding and give credit to some extent” to the Park legacy, saying “it was for the good of the people to display respect to someone who has passed away.” To Park Geun-hye, he encouraged working toward the social unity that her father failed to accomplish with a great vision for the country. Moon calls himself a political descendant of Kim and Roh. But on historical awareness, he is a poor pupil.

* The author is deputy editor of political and international news at the JoongAng Ilbo.