Ahn kicks off his campaign for a change in politics

Ahn kicks off his campaign for a change in politics 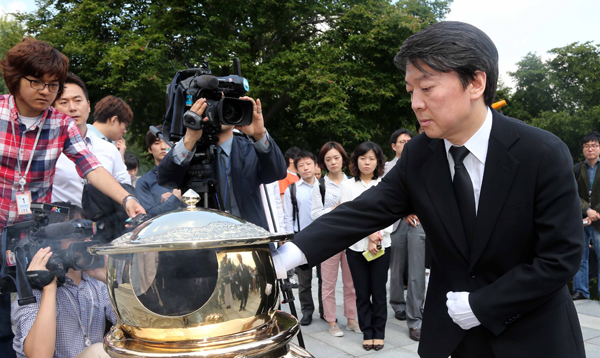 
Liberal independent Ahn Cheol-soo yesterday began his presidential campaign by trying to differentiate himself from his two mainstream party rivals.

Also, one of his key associates mentioned for the first time the possibility that Ahn might join the Democratic United Party, the largest opposition party. In addition, a prominent DUP persona severed her ties with the party and joined Ahn to head his campaign yesterday.

On his first day as a presidential candidate, Ahn tried to define himself as a new type of politician, not a traditional politician like rivals Park Geun-hye of the ruling Saenuri Party or Moon Jae-in of the DUP. During a visit to the National Cemetery in the morning, Ahn paid homage before the graves of all conservative and liberal former presidents, including Park’s father, strongman Park Chung Hee.

When Moon paid a visit to the cemetery Monday, he did not visit Park Chung Hee’s grave and said he would only do so if his Saenuri rival apologizes for her father’s dictatorial rule of the country.

“History has both good and bad,” Ahn said yesterday during his visit to the National Cemetery. “You should uphold the good while trying to correct the bad.”

Following the visit, Ahn also posted a message on his Facebook page and criticized Park’s father further. “Privatization of power in violation of law and due process can never be justified,” Ahn wrote. “The foundation of our industry was built during the Park Chung Hee era, but it required too much sacrifice from laborers and farmers.” 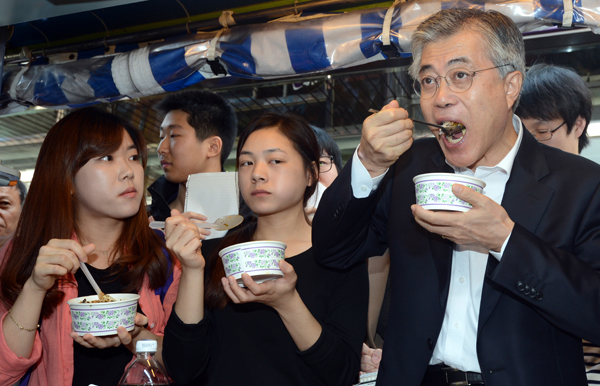 
Meanwhile, Keum Tae-sup, a lawyer and a key associate of Ahn, discussed in an interview with CBS radio yesterday morning preconditions necessary for Ahn to join the DUP. It was the first time that an Ahn associate talked publicly about the possibility.

Ahn has always stressed that his strength comes from having no connection with the business-as-usual politics. But if he doesn’t agree on a single candidacy with the DUP’s Moon, the two of them will split the liberal vote in December and deliver the election to the conservative Park.

He said Ahn could join the DUP if conditions are met to have a negotiation with Moon to consolidate their candidacies in some way.

Expectations are high that the 50-year-old software mogul-turned-politician will negotiate with Moon to see which of them will be the single liberal candidate. One idea is that one of the men will run for president and the other will be guaranteed the prime minister position if the liberals win.

After announcing his presidential bid Wednesday, Ahn said the timing was not right to have the negotiation yet. He said true change and innovation in politics, and the people’s agreement with it, were the two preconditions for him to begin negotiations.

In the radio interview yesterday, Keum said those were also the two conditions for Ahn to join the DUP. He also said Ahn could run as an independent if the DUP fails to reform and win the people’s trust.

Neither Ahn nor Keum have specified what would be regarded as the true change and innovation in the DUP. 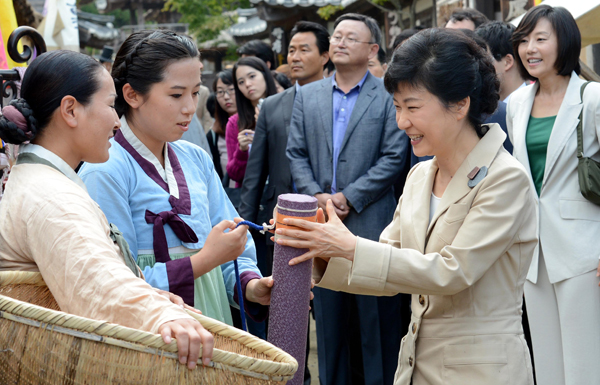 Park Geun-hye, right, presidential candidate of the ruling Saenuri Party, talks with actresses in an MBC drama yesterday as she makes a visit to the set in Yongin, Gyeonggi, to have a meeting with drama producers. [NEWSIS]


Moon also said yesterday that there is no need for the DUP to urge Ahn to negotiate or be obsessed with the idea. “We just have to remain calm and do our best to compete,” Moon said.

Ahn also named several key officials for his campaign yesterday. Park Sun-sook, a veteran strategist of the DUP and a close associate of the late President Kim Dae-jung, was recruited as a co-head of his team. After quitting the DUP earlier yesterday morning, she accompanied Ahn to the National Cemetery.

Before the April 11 legislative elections, Park headed the DUP negotiations to forge an electoral alliance with other liberal parties and also headed the party’s election committee.

Park is the first prominent mainstream politician to join Ahn’s campaign. Ahn also named lawyer Jo Gwang-hee as his chief of staff. Another lawyer, Jeong Yeon-sun, former secretary general of Lawyers for a Democratic Society, was named a spokeswoman for the campaign to jointly work with Yoo Min-young, Ahn’s current spokesman.

Following Ahn’s formal announcement of his presidential bid, his approval ratings soared. A JTBC-Realmeter poll on Tuesday and Wednesday showed that Ahn recorded 26.5 percent of the votes in a hypothetical race against Park and Moon. Park led the poll with 35.7 percent, while Moon earned 24.3 percent.

In a race between Park and Moon, Moon also beat Park, as he recorded 48.1 percent while she recorded 42.3 percent.

Meanwhile, Park of the Saenuri Party said yesterday that she can meet with Moon and Ahn, as Ahn proposed, at any time if an opportunity arises.

“I guess they will want to talk about a transparent election,” she said. “But I have long stressed that, and it cannot be achieved just by making a declaration.”