Police hold back on details about Daegu’s Houdini

Police hold back on details about Daegu’s Houdini 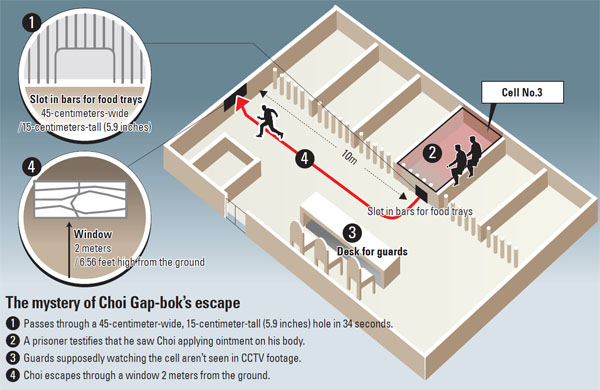 DAEGU - Police still haven’t caught the 49-year-old fugitive Choi Gap-bok, who escaped from a jail cell early Monday morning, supposedly by squeezing through a 15-centimeter (5.9-inch) gap in its bars. Nor have they released the CCTV tape of Choi making his amazing, Houdini-like escape.

But they have described the scene on the tape where Choi carefully squeezes his head, shoulders and finally his hips through the gap in the bars through which food trays were slid, saying he moved “like an octopus.”

They also clarified that he didn’t cover himself in shampoo to ease his passage, as reported earlier, but used an antibacterial ointment.

The manhunt continues, and Daegu police believe the career thief has returned to the Daegu area from Cheongdo County, where he was last seen by the police.

Police said yesterday that a taxi driver reported that he gave a ride to a man in his 50s from Yangeum Township, Cheongdo County to Dalseong County in Daegu.

The police also found a chicken with a broken neck about 100 meters (328 feet) away from where the passenger got out of the taxi. The police are dusting the chicken for fingerprints.

“There is a possibility that he might have startled by a sudden noise and ran away after he killed the chicken,” a spokesman of the police said. “He might stay in the mountains in the daytime and move at night.”

The Seoul Metropolitan Police Agency dispatched a Bell 412 helicopter fitted with an infrared camera to help with the search.

The police are being pilloried for their poor management of the case - allowing the convicted thief and child rapist to escape and not being able to catch him - and are also suspected of covering up details of the case that could disgrace them.

Initially, the police said two guards watching Choi’s cell early Monday morning were asleep at the time of his escape and one was surfing the Internet in another room.

Yesterday they said that none of the three can be spotted in the one-minute CCTV footage that shows Choi squeezing himself through the 45-centimeter-wide, 15-centimeter-tall gap in the bars.

The JoongAng Ilbo reported yesterday that none of the guards were in their proper positions and some police officers have confirmed the fact.

Sources who requested anonymity told the JoongAng Ilbo that this is the reason the police are not showing the CCTV footage.

“The CCTV footage shows guards making a shift change at 4:52 a.m.,” a spokesman of the Dongbu Police told reporters, “but they didn’t appear in the footage when the suspect was escaping.”

Police say Choi wriggled out of his cell around 5 a.m., and that it took him four minutes to prepare himself and get through the bars.

They say he used a disinfecting ointment called Fucidin to help squeeze through the bars, and that he started at 4:56 a.m. - four minutes after the shift change.

“He moved flexibly, like an octopus,” a policeman who reviewed the CCTV footage said.

According to the police, Choi first tried to put his head through the slot face-up but failed. On the next attempt, he lay on his stomach and turned his face to the side.

He managed to get his head out and then his right arm and shoulder, followed by his left arm. He got stuck when his hips wouldn’t pass, but then he removed his trousers and got entirely through. The police said the process of getting through the bars only took 34 seconds.

After putting his pants on, he passed the guards’ desks, bent some weak bars on a window and climbed out. The window was 2 meters off the ground.

An officer surnamed Han, 53, who was the chief of the station for Sunday night, made a patrol at 6:10 a.m. Monday morning, but failed to notice the suspect had left the cell. Choi had stuffed his shirt and a pillow under his blanket to make it look like he was sleeping.

An acquaintance of Choi said he is a master of yoga, which he learned over the two decades he was in and out of jail.

A 3 million won ($2,670) reward for information on Choi’s whereabouts was raised to 10 million won yesterday.