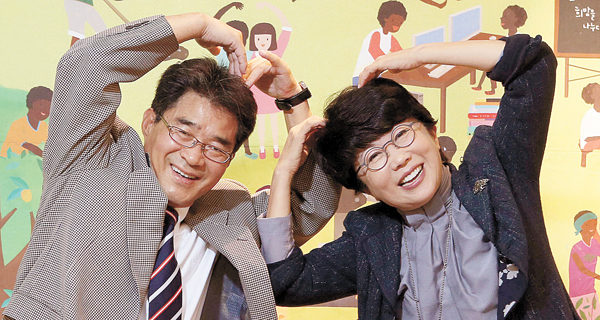 
“One football and one mango tree can instill a seed of hope in barren lands of Africa,” the slogan goes for the project established by Im Heung-se and Lee Kwang-hee, who have devoted a large portion of their time to improving the livelihoods of people on the continent.

Im is the coach of Football Acts 29, a South African youth football team, and is widely recognized for his ability to produce talent in the sport.

What the expert in the nation’s beloved sport has done in recent years, however, is far off the beaten football path. The 56-year-old coach has been at the forefront of the fight against AIDS in Africa through his passion for football. The coach-turned-activist has spent the last seven years setting up and operating football academies in over 20 regions in South Africa.

Im has put his efforts toward raising the level of immunity among children born with HIV by boosting their physical strength through the sport.

His efforts have spread to other parts of Africa, inspiring volunteers like Lee Kwang-hee, a renowned fashion designer and an owner of the Lee Kwang-hee Boutique.

Lee began her humanitarian work in 2009 when she visited Tonj in South Sudan with actress Kim Hye-ja. The famous actress and figure known for her humanitarian efforts suggested the trip to Lee as they headed to the troubled Sudanese village of Tanj.

Tonj in South Sudan, which became a sovereign independent state in July of last year, is a well-known village for Koreans as it is where the late priest Lee Tae-seok spent nine years serving the sick and poor before he died in 2010.

Mango trees, which bear fruit twice a year five years after they’re planted, represent life and hope for many struggling in Africa.

Planting one mango tree costs around $15, which is a big burden for people in Tonj who struggle daily to make ends meet.

Having witnessed people’s destitution, but also impressed with villagers’ selfless way of life, Lee established the charity organization Himango in 2009 and planted over 3,000 mango seedlings in Tonj and its surrounding areas over the past three years.

The Himango Village Center that will promote cultural and educational activities for villagers will also be set up in Tonj this year by Lee.

It was Lee’s proposal that the two jointly take part in the project for Tonj.

“I was very well aware of efforts put forth by Im in South Africa, giving hope to children through football,” the relief worker told the JoongAng Ilbo in an interview on Wednesday.

“When I heard Im was in the country, I wasted no time finding him and asking for his participation in a joint project.”

It happened to be about the right time for Im to take on a new directive.

“I started seeing kids play with football boots thanks to rapid economic growth in South Africa,” said Im. “So I began to think it was time for me to find a new direction to help those in need, then Lee asked me for help, which I gladly accepted.”

Im’s next goal is to set up a community football team in Tonj, a village now surrounded with mango trees planted by Lee. “The success story of South Africa is the story that South Sudan will also have in the near future.

“I can’t wait to see changes occur in the village with Lee through our efforts.”