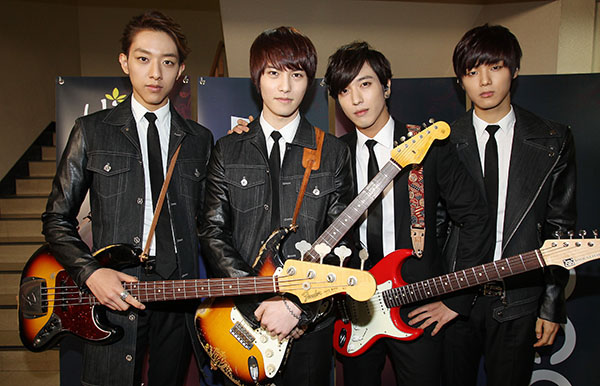 
CN Blue held a successful first solo concert in the United Kingdom on Saturday, according to their agency FNC Entertainment yesterday.

The four-member boy group performed more than 20 songs during its over-two-hours-long concert held at IndigO2 music club in London. Around 4,000 fans packed the concert hall, the agency said.

“Love Girl,” “One Time,” “Tattoo” and “In My Head” were some of the most popular songs performed at the concert. “Hey You,” the title song of their third Korean mini album “Ear Fun,” released in March, was also included on the set list.

The tickets were all sold out beforehand with more than 95 percent of the tickets purchased by non-Koreans, they said. The fans responded enthusiastically during the concert and some of them received emergency medical treatment on the spot after they collapsed from the mental exhaustion, the agency said.

“It feels like a dream that we wrapped up a performance in the U.K.,” the group said in a statement. “We are thankful and happy that we came to the birthplace of rock.”