For scientists in Korea, careers of stress, insecurity

For scientists in Korea, careers of stress, insecurity


A recent survey showed that seven out of 10 scientists in Korea want to leave for greener pastures.

A similar proportion said they were dissatisfied with the government’s science and technology policies, according to a survey last December of 519 Korean scientists conducted by the JoongAng Ilbo with the Korea Federation of Science and Technology Societies and the science and industry Web site Daedeoknet. 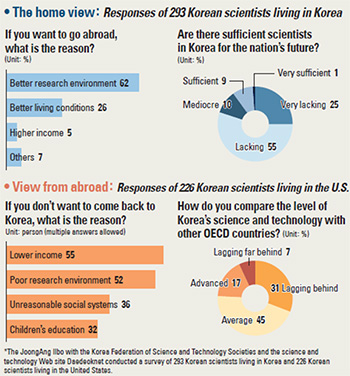 The survey was of 293 scientists in Korea and 226 scientists of Korean descent in the United States.

Over the past three years, three “star” Korean scientists in their 50s have committed suicide. These deaths raised questions about the local environment for the nation’s scientific community.

In July, 56-year-old Joung Hyouk, president of the state-run Korea Research Institute of Bioscience and Biotechnology, jumped to his death from the institute’s building in Daejeon. A horticulturalist who did his undergraduate and master’s work at Seoul National University and received a PhD from the University of Illinois, Joung was best known internationally for the development of in vitro potato microtubers in the 1990s, which can be used to produce high-quality seed potatoes.

Joung reportedly was under severe stress because of a fraud case related to a laboratory company he established last year.

In April 2011, 54-year-old Korea Advanced Institute of Science and Technology Prof. Park Tae-gwan’s suicide by hanging in his apartment in Daejeon came after a series of student suicides at the top science and technology school. Park won the Clemsen Award in 2009 from the Society for Biomaterials in the United States. He also was nominated as the best professor at Kaist in 2010.

In his suicide note, the scientist apologized to his family and Kaist, saying, “I will bring all my sins with me.” Police said the note did not mention the suicides of four Kaist students, but Park had been under investigation by the Ministry of Education, Science and Technology for allegedly spending about 22 million won ($20,285) of university funds for personal purposes.

The week before he killed himself, the ministry formally notified Park that he would be charged with embezzlement.

And back in 2010, Prof. Lee Sung-ik of Sogang University jumped off his Seoul apartment building. He was 58. The renowned physicist, an expert in superconductivity and recipient of the prestigious Korean Science Grand Prix in 2006, was reported to have been suffering from depression.

“Physics is my life but it’s placed an extreme weight on my shoulders,” he wrote in a suicide note. The note also said that he was in the middle of a major report, “but things aren’t going as well as I had expected.” Lee had been recruited from Postech to the private university two years earlier.

While the suicides of scientists may be extreme cases, 72 percent of Korean scientists surveyed stated they would “leave this country to go to work in a developed nation such as the United States should the opportunity arise.”

Of Korean scientists abroad, 66 percent said they want to go back to their home country but low pay and a poor research environment keep them abroad.

“I don’t know if I want to return to Korea after I complete my graduate degree,” said Park, a 27-year-old completing her doctorate in biology in New York. “Though I miss home, I am afraid I wouldn’t be able to adjust to Korean society again and get along with my colleagues there. If I go back, my research opportunities might be limited.”

Sometimes, it’s very lonely spending hours in the lab with uncertain results, Park admitted, “for there’s no guarantee that your experiment will be successful and that you will get funding for your next project. And you’re stuck with the people in your lab for hours on end, for months or years.”


Of the 266 Korean scientists abroad, over half said in the survey that the biggest reason to stay abroad was “a better quality of life.” Over a quarter replied, “because there are good job opportunities.” Only 17 percent responded that science and technology is “advanced” in Korea compared to other OECD countries, while 31 percent responded “it fell behind” and 7 percent said “it fell way behind.” There are some 20,000 Korean scientists in the United States.

The Education Ministry has been pushing its Brain Return 500 Project with the intent of attracting young talent from abroad, especially scientists and scholars. It launched the Institute for Basic Science in May to promote R&D investments and for Korea to become a “global hub” for scientists.

But the survey indicated a less than warm response to the government’s efforts. When asked, “What do you think of Korean science and technology policies?” 79 percent of Korean and 67 percent of Korean-American scientists responded poorly or very poorly.

The main complaints were: an environment where it is difficult to advance in research, unrealistic research fee regulations, bureaucracy meddling in research and a rise in temporary research positions as compared to permanent positions.

A 41-year-old scientist surnamed Nam who is employed at a state-owned research think tank in Daejeon often lies awake at night because of career stress. He enjoys his work, but he’s still a contract researcher. If he’s lucky, he may be hired as a salaried researcher in the next year or two, but he’s running out of time. By 2015, he will be in his mid-40s, which is considered too old to be put on staff at either a state-run or corporate research institute.

“When I feel anxious, I drink to forget everything,” admitted Nam. “Rather than blaming the framework of society, I blame my own lack of competence.” Nam completed his BA, Master’s and a PhD in engineering at a national university.

According to data from Representative Lee Sung-min of the Democratic United Party, who is on the Committee of Education, Science and Technology, 48.8 percent of the staff of 27 research and science institutes are not on salary. In the case of the Korea Research Institute of Bioscience and Biotechnology, which has a staff of 1,126, only 29 percent are on salary.

According to the government’s May Composite Science Technology Innovation Index report, Korea’s science and technology capabilities rank 10th out of 30 OECD countries. While it ranked fourth in research investment for the past four years, Korea has ranked last in the Science Citation Index for published research. The evaluation has been made every year since 2006.

Trying to find stable, sustainable careers and also excelling in their fields, researchers are under heavy stress.

“We do not have a breakdown of suicides by occupation, but a common denominator in triggers of suicide for middle-aged people include economic burdens, stress and depression,” said Dr. Moon Sang-jun, deputy director of the Division of Mental Health Policy at the Ministry of Health and Welfare. “But of course, such reasons are not the whole picture. And because suicide is still very hushed up in Korean society, we are lacking the in-depth study required to understand why the Korean suicide rate is so high.”

Some contributing causes to suicide, Moon said, include rapid changes in society, industrialization, globalization and extreme stress, especially from a competitive environment with weak coping skills and weak support systems.

Prof. Lee Kwang-hyung, artificial intelligence specialist at Kaist, said the government “in 2008 spent 11 trillion won in research and development funds and every year afterward invested another trillion won, but the money is being poured into the current poisonous system.”