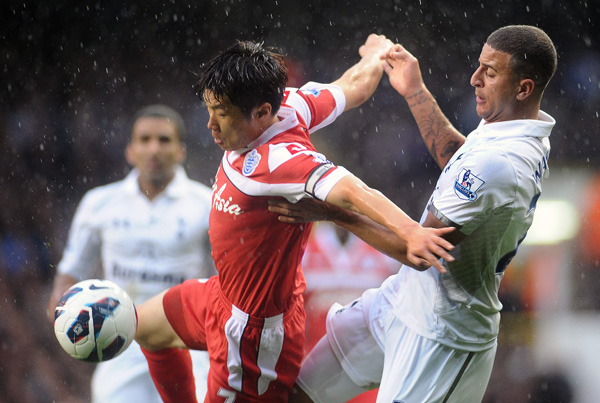 
Tottenham scored two goals in a three-minute span in the second half to earn a come-from-behind 2-1 win over Queens Park Rangers in the Premier League on Sunday to give manager Andre Villas-Boas his first home victory at the club.

Bobby Zamora had given the visitors the lead in the 33rd minute, but Tottenham equalized through an own goal by Alejandro Faurlin in the 59th.

In-form striker Jermain Defoe then secured the win for the hosts in the 62nd, tapping in a rebound from close range.

After a poor start, Tottenham now has two wins in a row with eight points from five games. QPR is in the relegation zone with just two points.

In another Premier League match on Sunday, Manchester United beat Liverpool 2-1 in an emotionally-charged atmosphere at Anfield after players and fans paid an emotional tribute to those who died in the Hillsborough Stadium disaster in 1989.

Robin van Persie’s late penalty earned Manchester United a 2-1 victory at Liverpool in a north-west derby that marked the first match at Anfield since the publication of the Hillsborough report.

Players and fans from both clubs generally respected the pre-match tributes to the 96 people killed in the 1989 tragedy, with captains Steven Gerrard and Ryan Giggs releasing 96 balloons before kickoff.

It marked United’s first win at its arch-rivals since 2007 and lifted the team to second in the table.

Chelsea is a point clear at the top after a 1-0 win against Stoke City. Champions Manchester City were held 1-1 by Arsenal on Sunday, Laurent Koscielny scoring a late equalizer after Joleon Lescott had put City ahead.

In Italy, AC Milan’s season slumped to a new low on Sunday as they had two players sent off and lost 2-1 at Udinese while the bizarre postponement of the Cagliari-AS Roma match further damaged Serie A’s fading credibility.

Roberto Di Natale scored the winner for Udinese with a 68th minute penalty, while the visitors had Cristian Zapata and second-half substitute Kevin-Prince Boateng dismissed in their third defeat in four Serie A games.

Inter Milan also went down to a shock defeat, beaten 2-0 at home by lowly Siena with Simone Vergassalo and Francesco Valiani scoring in the last 15 minutes.

Neither Milan nor Inter have won a game at San Siro this season in any competition in eight attempts between them. Napoli, Sampdoria and Lazio all lost their 100 percent records, leaving Juventus as isolated leaders with 12 points from four games after their 2-0 win over Chievo on Saturday.

In France, Olympique Marseille became the first Ligue 1 club in more than fifty years to win their first six league games when they beat Evian Thonon Gaillard 1-0 on Sunday.

Morgan Amalfitano headed home in the 33rd minute to lift Marseille to 18 points, four ahead of second-placed Olympique Lyon who drew 1-1 at Lille thanks to a late Lisandro Lopez equalizer.

In Spain, Real Madrid’s La Liga match at city rivals Rayo Vallecano was abandoned in bizarre circumstances on Sunday after Rayo officials said the lighting at their Estadio de Vallecas stadium had been sabotaged.

Meanwhile, John Terry brought his long and often controversial England career to an end on Sunday when the Chelsea defender announced his retirement from international soccer.

The 31-year-old, capped 78 times since his debut in 2003 and who appeared at two World Cups, issued a statement saying his position in the national team had become untenable due to the Football Association’s impending case against him.