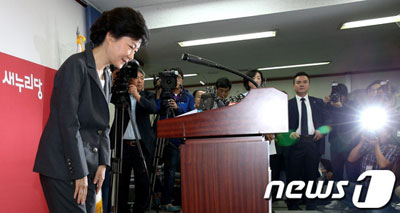 The ruling Saenuri Party's presidential candidate Park Geun-hye on Monday expressed remorse and apologized to all those who suffered under her late father's rule, a move aimed to shed the historic baggage that has plagued her campaign.

In a news conference held at the party headquarters in Seoul, the 60-year-old candidate said the 1961 military coup that brought her father to power; the 1972 Yushin Constitution, which effectively allowed late President Park Chung-hee to stay in power indefinitely and suppressed dissent; and the People’s Revolutionary Party incident that resulted in the execution of eight people, all delayed South Korea's political development and hurt the value of its Constitution.

The five-term lawmaker, who became the first woman to win a presidential nomination from a major South Korean political party on Aug. 20, sparked criticism earlier this month by claiming there were "two verdicts" over the execution of eight anti-government demonstrators in the " People’s Revolutionary Party" case of 1975.

The eight were cleared of all charges in 2007, after a court ruled they had been tortured into making false confessions about trying to rebuild the disbanded pro-communist group People's Revolutionary Party in violation of the anti-Communist act.

The Saenuri candidate also sparked controversy in July by saying her father made "the best choice in an unavoidable situation" in reference to his military coup.YONHAP