Snake park could be white elephant

Snake park could be white elephant 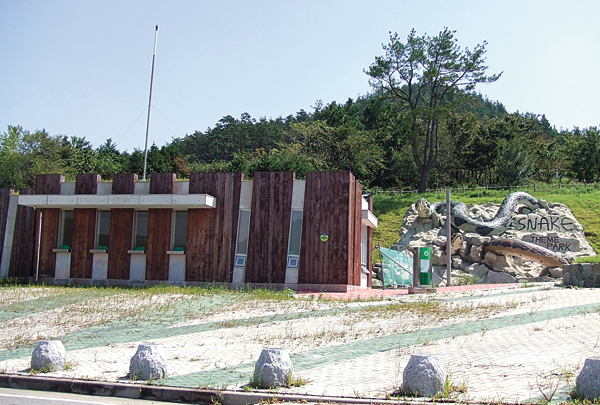 
A sculpture of a big snake with a sign reading “Snake Theme Park” stands at the entrance to the Hampyeong Ecological Park in Hampyeong County, South Jeolla.

Don’t book your travel plans yet. Construction on the snake theme park, which began in 2007, was halted more than a year ago when the South Jeolla Provincial Office demanded some changes in its development. “The construction is to resume after the Chuseok holiday,” said an official at the county office.

When construction is complete next May, locals are hopeful that the 19.5 billion won ($17.3 million) being pumped into the project will generate far more in spending by tourists streaming in to see the snakes, an amusement park and a somewhat enigmatic “Snake Detoxification Center.”

But naysayers are saying the county, home to 36,000, is just throwing good money after bad after the Hampyeong Ecological Park failed to attract visitors.

“Given Hampyeong’s over 300-kilometer (186.4-mile) distance from the capital area as well as its lack of tourism infrastructure, the theme park seems like nothing but an impractical business undertaking,” Lee Jin-hyung, a professor of tourism management at Mokpo National University in South Jeolla, told the JoongAng Ilbo.

It’s hard to deny that the ambitions that accompanied setting up the Hampyeong Ecological Park, which offers trails and even some bears, have not panned out. Opened in 2001, the park’s annual ticket sales of 140 million won pay less than 10 percent of the park’s running costs of 1.5 billion won, according to a worker at the park who spoke on condition of anonymity.

But the snake park is guaranteed to be more of a draw, says the Hampyeong County Office. It expects to triple the number of visitors, while the yearly operation cost will be kept at 560 million won.

“Much lower maintenance costs for the snake park are possible since we will do a joint operation of the two parks,” said an official at the county office.

Hampyeong County points out that it knows how to draw tourists since it was designated a 2012 IFEA World Festival and Event City for its annual Butterflies Festival, which takes place every April to May.

Professor Lee of Mokpo University pooh-poohs that claim. “The Butterflies Festival is a 12-day event every year that does not require spending money on maintenance,” he said. “Facilities like the ecological park require continued investments, and that’s why thorough research is needed prior to starting a project.”

Of the 19.5 billion won budget, 11.7 billion won comes from central government funds. The balance is shared by the provincial government and county office. There is no private investment so far, but the country is hoping to attract 8 billion won in commercial investment to build an amusement park and other facilities.

Hampyeong’s fiscal self-reliance ratio, meanwhile, is currently at 8.2 percent, giving it the rank of 84 out of 85 Korean counties for fiscal health.

Finally, there is the question of whether anyone wants to go to South Jeolla to see snakes.

“Reptiles such as snakes can come off as abhorrent to some potential visitors,” admits Lee Ki-jong, who teaches tourism management at Kyung Hee University in Seoul. “That’s why elaborate and detailed tour programs are required to attract visitors to a snake park.”