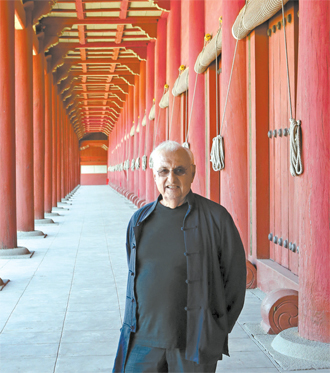 With his distinctively eccentric style, Frank Gehry has become an icon of architecture. When brick and concrete were the norm, he was working with chains, plywood, stainless steel and titanium. When others were going for matchbox-style buildings, Gehry’s smooth, freestyle structures - the Guggenheim Museum Bilbao in Spain, Walt Disney Concert Hall in Los Angeles and Vitra Design Museum in Weil am Rhein, Germany, among others - flowed.

The 83-year-old Canadian-American architect visited Korea early this month with his wife, two sons and their wives, as part of a family trip to celebrate the 50th anniversary of Gehry’s Los Angeles-based firm.

There was one piece of architecture in Seoul that the Pritzker Architecture Prize winner wasn’t about to miss: the World Heritage Site of Jongmyo, the royal ancestral shrine of the Joseon Dynasty (1392-1910). He visited it 15 years ago, but wanted to see it again and invited the JoongAng Sunday to tag along.

At 8:50 a.m. on Sept. 6, a group of tourists waited outside the doors of the shrine in Jongno District, central Seoul. Among them was Gehry, who said he had asked his family to accompany him many times and this was the day.

About 10 minutes later, the doors opened and the family entered. Gehry stood in the main hall of Jongmyo, where 19 rooms contain spirit tablets of 19 Joseon kings and 30 queens. Suddenly, he joined his hands together, and slowly bowed his head.

“Isn’t it beautiful?” he asked. “You can’t explain something this beautiful. It’s like having to answer why a beautiful woman is so beautiful. Whoever enters the shrine would feel this way.”

Before proceeding to the woldae courtyard covered with wide stereobate unique to traditional Korean palaces and royal buildings, Gehry explained to one of his daughters-in-law that the space on the woldae and the space below it are utterly different. He suggested that she think about it and enjoy the difference.

After seeing the Jeongjeon, which is known as the longest wooden building in Asia, Gehry described it as “democratic” in that the elaborate, identically sized spaces line up next to each other in a way that evokes both equality and infinity. He compared it to the cosmos.

“It’s hard to find such an impressive space as this one,” he said. If he had to pick a building with a similar feeling, it would be the Parthenon on the Acropolis in Athens.

“This isn’t minimalism,” he continued. “It is simple and strong, but not minimalism. Many misunderstand, thinking something simple is minimal. But minimalism excludes emotion.” Jongmyo embodies the emotions and enthusiasm of the people who built it, he said.

At that moment, a crowd of Japanese tourists swarmed in. Gehry noted that some 15 years ago there were almost no visitors. Koreans should be thankful for having this building, and it is important to understand and respect one’s own culture, he said.

After seeing a reproduction of Jongmyo’s interior and watching a 10-minute video of the shrine’s ancestral ritual, Gehry said he’d like to participate in the ceremony held the first Monday of May.

From left: The Neuer Zollhof building complex in Dusseldorf, Germany and the Walt Disney Concert Hall in Los Angeles are some among Gehry’s projects. Provided by the Frank Gehry Studio


After the hourlong tour ended, the architect lamented that Seoul’s skyline is visible from the shrine.

Gehry has long been at the center of controversy for creating buildings with quirky materials that are often avant-garde.

Asked why his buildings are so unusual, Gehry talked about the architecture in Bhutan.

People there think new buildings should be built like old buildings, and they believe that’s harmony. But it is just a habit, he said. “Harmony isn’t about looking identical,” he said.

“When people look at one of my buildings, they think it’s bizarre because it’s not something they’re used to seeing. Plus, they think that curved surface architecture is hard to build and costs a lot of money. That’s just a prejudice. Like I said at the lecture yesterday [at Leeum, Samsung Museum of Art], the difficulty can be solved with computer programs.”

In 2002, Gehry established “Gehry Technologies” for his computer design work. Catia, the multiplatform commercial software suite created for Dassault’s Mirage fighter jets, is able to calculate a building’s dimensions up to seven decimal places. Through this practice, as well as taking into account a building’s surface area and volume, electrical systems and mechanical systems can also be determined.

In addition, through computer graphics the shape of the building can be changed in any number of ways. Because the technique is three-dimensional, the construction team doesn’t need any extra assistance from the design team because all it has to do is look at the computer screen.

Through this elaborate plan, Gehry is able to make his designs reality. Many of his works are inspired by flowing objects, such as fish, an idea he got from a Japanese woodblock painting of carp made by Hiroshige Ando. Other inspirations include boats, one of Gehry’s favorite pastimes; Marilyn Monroe’s windblown skirt in the famous scene of her standing on a subway grate as a train passes in “The Seven Year Itch”; and a cello, the musical instrument to which Gehry often compares himself.