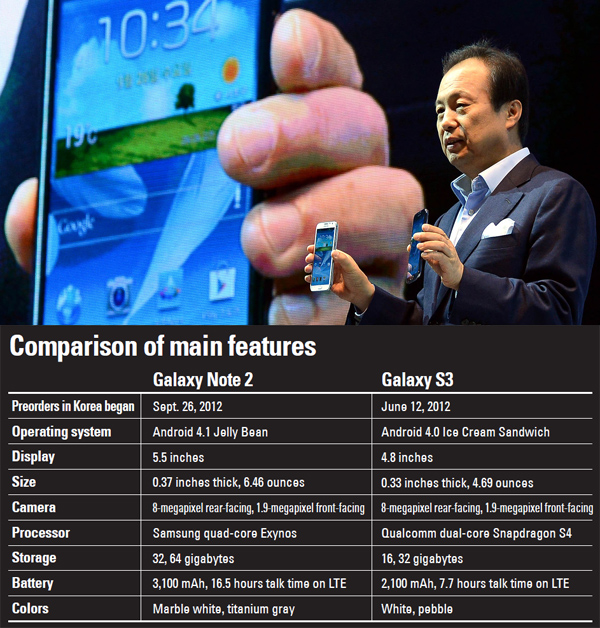 Samsung Electronics yesterday started selling the second version of its hugely successful Galaxy Note in the local market at the second highest price of all its smartphones - as much as 1.15 million won ($1,026).

Preorders for the Galaxy Note 2, featuring a 5.5-inch screen, 0.2 inches larger than its predecessor, began immediately after the top electronics maker unveiled the machine at a press event. Its first showing to the world was at the IFA consumer electronics fair in Berlin last month but global sales will kick off here in Korea.

Being offered through all three mobile carriers - SK Telecom, KT and LG U+ - with fourth-generation long-term evolution connectivity, the Android-powered handset carries a price tag of 1.09 million won for 32 gigabytes of storage and 1.15 million won for 64 gigabytes.?

Both models bust the psychological barrier of 1 million won following Samsung’s 16-gigabyte Omnia, which cost 1.08 million won in 2008. The Galaxy S3, the last smartphone released by Samsung before the Galaxy Note 2, was priced at 999,000 won when it was rolled out in June although its cost nosedived to as low as 170,000 won in August as carriers desperate to attract subscribers offered hefty subsidies.

Apple’s 64-gigabyte iPhone 4S, the latest version available in Korea, costs 1.07 million won. Two other Korean-made premium smartphones with cutting-edge cameras and innovative user experience features - Optimus G from LG Electronics and Vega R3 from Pantech - also cost in the 900,000 won range. The second- and third-largest players in the local handset market debuted them here last week and this week in a bid to lure customers who want a shopping spree ahead of the Chuseok holidays that begins this weekend. The Korean companies are rushing to start selling smartphones earlier than the feared iPhone 5 from Apple, which won’t be available in Korea for a few weeks. Samsung brags about the “best-ever features and technologies” in the Galaxy Note 2 as a reason for its stiff price.

“The Galaxy Note 2 has adopted the most innovative functions since Samsung began developing smartphones,” said J.K. Shin, president of Samsung’s IT and mobile communications division, at a press conference at the company’s headquarters in southern Seoul yesterday. “The price range lives up to the functions, we believe.” He avoided an answer when reporters asked him about the steep price collapse of the Galaxy S3.

Shin confidently forecast that the new handset will sell globally in the next three months three times more than its preceding version in the same amount of time. The first version of the Galaxy Note sold 2 million units in the first three months after its release last October. That implies that Shin expects the Galaxy Note 2 to sell 6 million units by the year’s end.

The Galaxy S3, by comparison, has sold over 20 million units internationally.