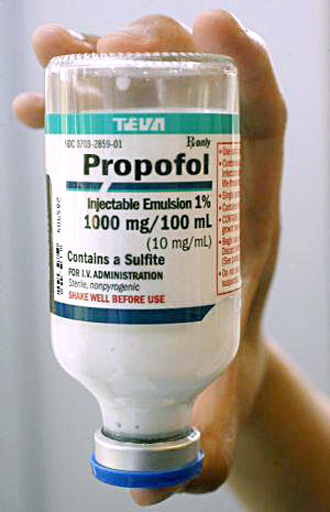 A bottle of propofol

Of all the plastic surgery clinics in southern Seoul, there’s one in Apgujeong-dong that displays photos of all the celebrities who it has made more beautiful.

But aside from the clinic’s professional skills, it is also known for offering the sleep inducer propofol. That’s what many of its customers want.

When a JoongAng Ilbo reporter asked a receptionist for a consultation, she came forward with this offer. “If you want a fat removing procedure, we can put you under general anesthesia with propofol,” the staffer volunteered. In most clinics, those procedures are done under local anesthetics.

“That clinic has aided and abetted patients’ addictions to propofol by recommending it for procedure that don’t need it,” says a former patient who says she became dependent on propofol after going to that clinic. “They put six to seven addicts in a small room and administer propofol.” She named six other plastic surgery clinics in Apgujeong and Samseong-dong that offer propofol freely. Two of them offered the drug to a JoongAng Ilbo reporter, although one admitted there was a crackdown on propofol abuse there by police. 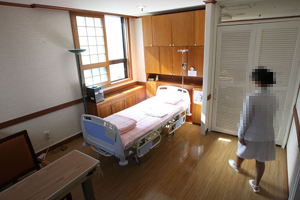 Propofol - the drug that killed Michael Jackson - has become a public health menace, particularly in Gangnam, the wealthiest and trendiest region of the country. Propofol is a hypnotic agent used to induce sedation. It is legitimately used in surgeries and procedures like endoscopies to make patients forget what they went through. Recreationally, it can produce a feeling of euphoria and also a feeling of having slept well, which is what Jackson used it for. Abusers are often overworked doctors, nurses or hospital staff.

Propofol was categorized as a psychotropic drug by the Korea Food & Drug Administration in February 2011. That makes it highly restricted.

Despite the government’s effort to prevent the abuse of propofol, it’s not hard to get, even on the Internet. When the JoongAng Ilbo posted “propofol selling” on Korean Internet portal sites, messages that read “We sell propofol, e-mail us please,” were found easily. A day after sending an e-mail, a stranger called and said he could send five bottles of propofol within three to four hours for 300,000 won ($267). The country code of his phone number that of Thailand. When the reporter delayed the money transfer, the broker pushed him to make a decision. “My phone number and bank account numbers will be changed soon,” he said, “as they are registered in fake names.”

Last month, a 45-year-old obstetrician surnamed Kim was arrested on charges of abandoning a corpse. Kim allegedly invited a friend to his clinic to have sex under the influence of some substance. He allegedly injected her with a combination of drugs including propofol and midazolam, which has a similar amnesiac effect, which made her pass out. Then he had some kind of “physical contact” with her, according to police. When he came back to check on her two hours later, she was dead and the doctor and his wife allegedly abandoned the corpse in a park. The case got even more attention later when the victim was revealed to be a minor actress.

A doctor running a plastic surgery clinic in Apgujeong-dong voluntarily checked himself into a psychiatric hospital in South Gyeongsang in 2010. He was addicted to propofol, and confessed that it was almost impossible to practice medicine. “I administered it myself in order to overcome stress that came from work,” the doctor told the JoongAng Ilbo.

According to a study conducted by the National Forensic Service, a total of 36 people died of overdoses of propofol between 2000 and 2011. The study said 28, or 77.8 percent, were women and 15 of them, or 41.7 percent, were doctors, nurses or hospital workers.