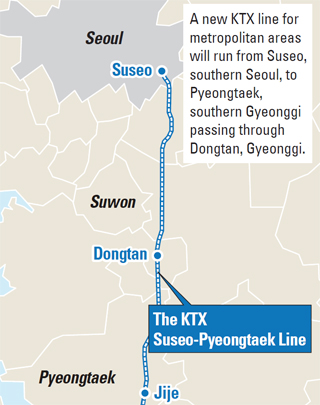 The Seoul Metropolitan Government said yesterday they have conditionally approved designating Suseo as the terminus of the KTX Suseo-Pyeongtaek Line, a bullet train development project that the central government has been working on since 2010.

The municipal and the central government have been at odds over designating Suseo as the terminus for the new KTX line because areas around Suseo are designated as limited development regions.

The project is projected to be completed by 2015 and its construction has been under operation, except for the Suseo section.

The plan for Suseo section was to build a four-story station with a transit transfer center, which allows passengers to connect with Suseo subway station on line No. 3, and recreational facilities in 7,941 square meters (1.96 acres) of land in Suseo-dong, Gangnam District.

The ministry also has proposed to use 380,000 square meters (4.1 million square feet) of land around the station so hotels, department stores and convention centers could be built.

The proposal of the project, however, has not been approved by the municipal government’s urban planning committee. It said that the plan has not provided a measure to prevent floods and also could damage the environment of Suseo.

The city government, however, changed its stance after considering the significance of railroads in urban planning.

“We had to take enough time to review the plan because it proposed to build such facilities in a limited development zone,” said Lee Je-won, head of the Urban Planning Department from the Seoul Metropolitan Government.